Brushwolf, prairie wolf, kyute, little wolf, mush-quo-de-ma-in-gon (Chippewa). These are all names for one of the most adaptable animals on this planet--the coyote. A member of the animal family that also includes foxes, and wolves, the coyote can be found throughout Wisconsin.

The coyote is about the size of a medium-sized dog. You can also think of it like this--picture the size difference between a fox and a wolf. Then imagine an animal that fits right in-between them in size. That's the size of a coyote. An adult male is 44 to 52 inches long, including its 14-inch tail. It weighs between 25 to 42 pounds. Look for its long, thin legs, a tapered muzzle, yellow-colored eyes like foxes, and rather large, pointed ears. It also has a bushy, black-tipped drooping tail.

Coyotes range in color from a dull yellow to gray. The fur on the upper part of the body, like the back and neck, is usually buff-gray. Black-tipped hairs give these parts a darker appearance than the cream-colored fur on the coyote's underparts. The face and backs of the ears are redder than the rest of the body. Notice the white on the inside of the ears, the edges of the mouth and the throat. Their fur is thick and beautiful. 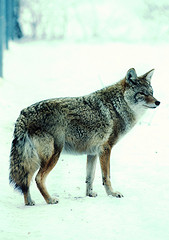 In Wisconsin, coyotes usually mate between February and March. Although the same coyote pairs may breed for many years in a row, they do not mate for life. A litter of 5-7 pups is usually born during April. The pups are born in a hidden den that is made up of two or more tunnels leading to a 3-4 foot deep hole in the ground. Sometimes coyotes will use abandoned badger, woodchuck, fox or skunk burrows as den sites. They will make them bigger, then call them their own. They will also use old coyote burrows, or less often, dig a new den. The entrance to their den is about 10 inches wide by 13 inches high. The female coyote prepares more than one den before the pups are born so that the young can be moved to a safe place if predators threaten or if fleas get too bothersome. Many dens have a couple of openings so that the coyotes can escape through the "back door" if they need to.

Pups are born with short, yellow-brown fur. After about 10 ten days, their eyes open and they start crawling around the den. The male brings food to the female while she stays with the pups for the first 2 months. Some of the food is regurgitated (barfed back up) to feed the pups. At about 3 weeks old, the pups head outside of the den to play. By the time the pups are 8-9 weeks old, they have been weaned (no longer need their mother's milk) and the den has been abandoned. The pups are taught to hunt by following the parents on hunting trips. By the end of the summer, the pups usually move out of the parents' territories. Sometimes the young coyotes stay with the parents to form a hunting pack.

Part of the reason that coyotes are so adaptable is that they're not too picky about what they eat. They are both predators and scavengers. In other words, they'll hunt for food, but they will also feed on already dead animals (carrion). In Wisconsin, deer carcasses are the main source of carrion. Although scavenging is an important source of food for the coyote, it also hunts small rodents, rabbits, hares, ruffed grouse, and sometimes deer. Birds, fish, reptiles, amphibians, insects, fruits, berries, and other plants like corn are also on their menu depending on the season and habitat. Coyotes are nocturnal. (Remember what that means?) They are active at night. Early evening and again before dawn are the times when they are most active.
coyote tracks

Have you ever seen your dog stalk something in your yard? Well, coyotes do the same thing. They quietly stalk small rodents and then pounce on their prey. Most of the time they move around by trotting or loping, but they will gallop if they are being chased or if they are chasing prey. Their average running speed is about 25 miles per hour. A single coyote usually chases down rabbits and hares. Hunting in a small pack or in pairs is how the coyote pursues large prey like deer.

The coyote is a smart and highly adaptable animal. While the ranges of most other mammal predators have gotten smaller as humans have expanded where they live, the coyote's distribution throughout North American has expanded. Coyotes have been able to adapt to living near humans. Some coyotes live in large urban areas like Milwaukee and Madison. While city open spaces with green, mowed grass provide coyotes with plenty of rabbits to eat, their preferred habitat is forest, woodland edge, and sometimes dry marsh or prairie if it provides enough cover.

The size of a coyote's home range (the area that they live in and travel for food) depends on factors like how much plant cover there is, food availability, and number of coyotes in the area. In Wisconsin, coyote home ranges are generally 5-10 square miles in size.

Coyotes are very sociable animals and frequently play with each other. Besides hunting in small packs, they will gather to feed on carrion (dead animals) or just to play. Coyotes advertise their location with smells and sounds, such as howling or yapping. Coyotes mark their territories during the denning season with urine, feces, and glandular scents. This is their way of saying, "hey, get outta here, I was here first."

Coyotes were in Wisconsin when the first settlers arrived. At one time coyotes were abundant in the southern part of the state and less so in the north. Coyotes were hunted in the 1800s and early 1900s for sport and because they were considered to be pests. Extensive hunting in southern Wisconsin caused the numbers to decline so that at one point, coyotes were more common in the north. Now, the population of coyotes has increased and today they can be found throughout Wisconsin. They are doing well in Wisconsin, although in areas of the north where the gray wolf is established, the number of coyotes has declined. The coyote plays a valuable role in Wisconsin as both a scavenger and predator.

The next time you're camping or hiking outside in the evening, keep alert and you may be treated to the sound of this "barking dog."

For more information on coyotes and some great photos, check out the following books:

Do You Want to Be A Badger?
Cottontail Rabbit
Elk
The Mink
Opossum