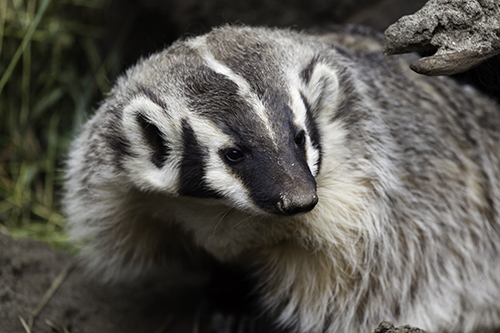 If you live in Wisconsin, you may already be a badger--a badger football fan that is. You probably also know that the badger is our state animal. But, do you know why Wisconsin is called "the badger state"? Back in Wisconsin's history, all the way back to the 1800s, miners dug tunnels into hillsides as they searched for lead and then lived in them during the winter months to keep warm. This reminded people of badgers and Wisconsin became known as the badger state.

The animal we know as the badger is found throughout our state. You've probably never seen one since they are solitary most of the year and stay hidden inside their shallow dens during the day. They hunt mostly during the night and live in large open fields and grasslands extending between 400 and 600 acres. You can look for signs of the badger by looking for piles of dirt outside of a large burrow which they dig with their incredibly long thick claws. If you see a short, stocky animal with a small face staggering around in the grasslands, it could be a badger.

Badgers don't eat brats and soda like many "badger fans," but they are carnivores (meat-eaters) and hunt for animals found in grasslands like pocket gophers, ground squirrels, rabbits, and small birds. They can sniff out food almost as well as dogs can. And, that's better than most animals. They aren't friendly like most dogs though; this animal is a ferocious fighter with an attitude and should not be bothered. Badgers will snarl, growl, and can give off a musky and smelly scent like a skunk if disturbed. These aggressive traits are also why badgers are frequently chosen as a team mascot.

If you see a badger in the winter, you're very lucky, since they spend 90 percent of their time deep underground in their den or "sett." Believe it or not, the dirt inside the den keeps the badger insulated under the ground. It can be 31 degrees warmer than the outside air. No wonder miners used to stay in the tunnels during Wisconsin winters! Keep your eyes peeled next time you're in a large open field in the winter and maybe, just maybe, you'll see the badger's tracks in the snow.

As the fans say "If you want to (see) a badger, just come along with me, by the bright shining light, by the light of the moon."