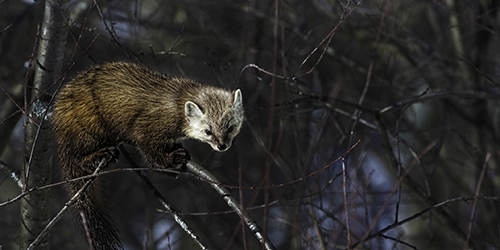 Pine martens are small, rare members of the weasel family often confused with two other weasels that live in Wisconsin: fishers and stone martens. Like other species in the weasel family, the male and female are different sizes. The female is about three-fourths the size of the male. The female pine marten measures about 18-22 inches and stands about 6 inches high. Females weigh in at 1.5-1.8 pounds and males at 1.6-2.8 pounds. Their fur is soft and thick, varying in color from pale buff or yellow to reddish or dark brown. Their throats are pale buff with black tails and legs. Two vertical black lines run above the inner corners of their eyes. In winter, long hairs grow between the toe pads on their feet, similar to the snowshoe hare. Thick fur helps keep their feet warm and helps them travel long distances on snow. Pine martens have long, bushy tails, one-third the length of their body.

Fishers live in similar habitat, have similar tracks and are darker in color than pine martens. Stone martens are non-native species and are also about the size of the male pine marten. They are pale gray to brown with a white throat patch.

The pine marten is nocturnal and we don't know much about them. We do know that most weasels don't climb, but the pine martens and fishers are excellent climbers. They'll pursue prey, red squirrels or chipmunks, up a tree and may climb trees to escape danger. Martens move across the ground in a zig-zag fashion, then take a series of jumps. They're solitary but curious animals.

Pine martens live in mature, dense conifer forests in northern Wisconsin.  They can be found in woods with northern white cedar, balsam fir, spruce and eastern hemlock, especially where trees have fallen. Forests provide plenty of food, protection from predators and den sites to use. Males roam a large territory of 5-10 square miles, but females stay closer to home only traveling 1-5 square miles. Pine martens are on the move and will cover their entire territory every 8-10 days as they hunt. They don't like other males in their territory, but they do like to have the females around.

In the past, pine martens lived in mature conifer forests of the northern United States, north to treeline in Canada. Populations extended southward along the Sierra Nevada Mountains in California, the Rocky Mountains to New Mexico, the Great Lakes and the Ohio River Valley to southern Ohio. Today, pine martens live across Canada and Alaska and in the Sierra Nevada Mountains, the Rocky Mountains south to Colorado and the northern parts of Minnesota, Wisconsin, Michigan, New York and the northern New England states.

Pine martens are omnivores (they eat both plants and animals), feeding on mostly small rodents. They also eat: squirrels, hares, shrews, birds, bird eggs, amphibians, reptiles, insects, fish, crayfish, nuts, fruits and carrion (dead meat). In the winter, martens will tunnel under the snow in search of mice and other small mammals. Even though they're at home in trees, they do most of their hunting on the ground. They have a high metabolism, and require a lot of food for energy.

Pine martens first mate at 2 years-old some time between July and August. Their young are called kits and are born in late March or April, 9 months after mating. The female makes a den in a hollow tree, stump or rock crevice, lines it with leaves, moss and other vegetation and gives birth to 2-4 kits. At birth the young kits are sparsely furred with their eyes closed. At 5 weeks old, their eyes open and the female begins to feed them meat. They're weaned at 6-7 weeks and almost full-grown when 3 months old. The female rears the young alone and will leave her kits soon after they're weaned. Young martens may move out of their home territory in late summer or early fall to establish their own territories.

Mature conifer forests covered northern Wisconsin before the 1800s, ideal habitat for pine martens. After European settlers arrived with their skills of trapping and lumbering, the number of pine martens declined. At that time there were no regulations to protect them or biologists to study them. Their populations declined because too many were trapped and others lost their habitat. Trapping was banned in 1921 after the decline was noticed. But, by 1939, martens had been extirpated (trapped until none were left) from our state and in other parts of their range.

In 1953, biologists with the Wisconsin Conservation Department tried re-establishing a pine marten population by releasing animals from western states in Wisconsin. The first pine martens did not survive. In 1972, pine martens were placed on the Wisconsin Endangered Species List. Then, between 1975 and 1983, the DNR Bureau of Wildlife Management and the U.S. Forest Service released 172 pine martens from Ontario and Colorado into the Nicolet National Forest. This was successful and established a breeding population of at least 150 martens. In 1987, Wisconsin DNR biologists released 31 martens from northern Minnesota in the Chequamegon National Forest.

Today, the DNR's Bureaus of Endangered Resources, Wildlife Management, and Research, along with the U.S. Forest Service have designed a Pine Marten Recovery Plan. Biologists estimated that in 1988 there were about 180 pine martens in Wisconsin. They now estimate (as of 1996) that there are 500-1000 martens in Wisconsin, mostly concentrated in the Nicolet and Chequamegon National Forests. Biologists continue to conduct population and habitat studies and plan for habitat management and protection. Education programs to inform the public about pine martens and trapping laws are important parts of the recovery plan.

What You Can Do