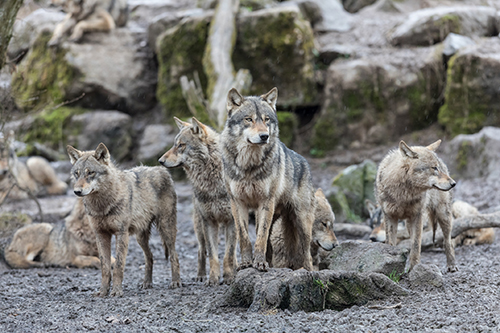 Have you ever heard a wolf howl in the wild? Not many people have. Once, the haunting sound of wolves echoed throughout North America. Three hundred years ago, somewhere between 3,000-5,000 wolves roamed all over Wisconsin. In 1960 there were no wolves here. It is estimated (2014) that there are 600+ wolves across the state, most of them in the northern half of Wisconsin.

So, what happened to these animals? Read on.

Timber wolves before you were born

Long ago, the land in Wisconsin provided wolves with the kind of habitat (food, water, shelter, space) they needed. But beginning in the 1830s, many European settlers moved to our state and started to change the landscape. They cleared land to put in roads and to build towns and farms. They hunted elk and bison, animals that were part of wolves' diets, until the elk and bison were gone.

In 1865 people passed bounty laws in Wisconsin. People could kill all the wolves they wanted to and they were paid money to do so. Bounty laws were changed in 1957, but by then there were few wolves left in Wisconsin. At that time, the only wild wolves in North america were in Minnesota, Canada, and Alaska.

In the early 1970s, new wolf packs were found in northern Wisconsin. Where do you think they came from? Minnesota. These new packs needed protection, so in 1975 wolves were added to Wisconsin's endangered species list. In 1979 wildlife biologists began to monitor wolf populations and to study wolves and wolf behavior to learn more about them and what they needed to survive.

Biologists capture adult wolves to put special radio collars around their necks. The radios help biologists follow the wolves around and locate the packs' home sites. During the summer, under cover of darkness, biologists howl near these home sites to learn whether pups are hidden there. Biologists listen carefully to the returned howls because pups howl at a different pitch than adults. In winter, when there is snow on the ground and no leaves on trees, biologists can count how many wolves are in each pack. They count the tracks in the snow or count the animals from an airplane. Tracking also helps biologists learn more about the wolves'territory.

A territory is the space in which wolves live. Wolves live together in family groups called packs, usually 2-12 wolves. Each wolf pack needs about 20 to 100 square miles of territory in which to find water, food, shelter and to raise young. Wolves defend these territories from other wolves by scent marking and by howling. Just like some people mark the edges of their property with signs and fence posts, many animals mark their territory, only they do it by urinating and defecating.

Check out this map of wolf territories (Leaves EEK!) to find out where you can find wolves in Wisconsin. You can see some wolf photos from winter wolf surveys in our aerial photo gallery.

In 1989, a group of concerned citizens got together with the Department of Natural Resources to develop a Timber Wolf Recovery Plan. The goal of the plan was to work toward having wild wolves roaming northern Wisconsin. Wolf population monitoring was put into action with live-trapping, radio telemetry, winter snow tracking, and summer howl surveys.

Because of the success of recovery efforts, wolves have made a comeback in our state. When the population reached 373 in 2004, wolves in Wisconsin were reclassified from threatened to protected. Wolves were removed from the endangered species list in Wisconsin on January 27, 2012 and then a Federal court decision relisted the gray wolf as an endangered species in the western Great Lakes region (including Wisconsin) on December 19, 2014.

You can see some wolves and watch biologists track wolves from the ground and the air in this wolf tracking video from 2001.