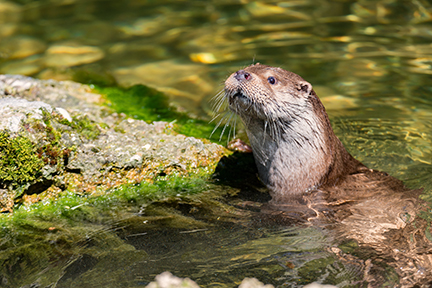 In Wisconsin's streams, rivers, marshes, lakes, and ponds you may see a sleek, dark brown critter with a long, tapered, muscular body gliding just below the water's surface. The River Otter is known for its broad head and small facial features, except for a rather large nose pad. If you see an otter on land, don't confuse it with the mink. If you see one in the water, don't confuse it with a muskrat. Look for the webbed feet, 2-4 inch whiskers and a light tan cheek, chin, throat, and belly patch and thick muscular tail. Otters measure about 3-4 feet long with a 12-18 inch tail.

Otters munch from an aquatic menu. Their favorites are fish such as suckers, minnows, sunfish, bass, and minnows. Their second choice is crayfish, then frogs and miscellaneous animals. They like to forage near shorelines, overhanging banks, and areas where fish are found. They will also eat birds and vegetation. Otters need about 3 square miles to find all of this food. Otters will hang out at a few of their favorite spots in this large area, depending on where the eating is good. They mark their territory using scent from their feces, urine, and musk. Just like some people mark the edges of their property with signs and fenceposts, many animals mark their territory, only they do it by urinating and defecating in strategic spots. They also communicate by making sounds, like a bird chirping, a grunting sound when playing or grooming, and a high pitched scream when fighting or mating. When they get surprised or frightened, you may hear them snort.

Otters are known as playful animals. They like to wrestle, chase other otters, and play capture and release with live prey. Each of these "games" helps the otter become better coordinated and helps them fit into the social structure of the group. In the winter, you'll find otters traveling overland by bounding 3-4 times, pushing off with their hind feet, and then sliding 5-15 feet on the snow. Downhill slides are a bonus, but otters rarely go back to the hilltop to slide down again, contrary to what people think. Have you ever seen an otter track print before? You'll most likely find it along the shores of a river or stream. Take a look below...

Otters use dens to raise their 2-4 pups which are born in April or May following one year of gestation (pregnancy). They're not picky and most of the time an otter will take over a burrow made by another animal in a hollow log, brush pile, or abandoned beaver lodge. Young otters are born about 4.5 inches long, furry, with their eyes closed for about a month. Pups are weaned at 8-10 weeks and then they learn to swim. Some love the water and dive right in, while others have to be coaxed or forced in for the first time. They are excellent swimmers and can stay underwater for up to 4 minutes. They've actually been known to dive to depths of more than 40 feet. Their speed and agility in the water helps them outmaneuver and catch fish and other quick prey. After about a year each otter will strike out on its own and establish its own territory.

Trapping is a Wisconsin tradition that began with the Native Americans and continues today. Today, otters are one of Wisconsin's most intensively managed furbearers because of their smaller population numbers than beaver and muskrat. The otter trapping season is held during the middle of winter to ensure that only prime furs are harvested. Because they live in the same habitat as the beaver and muskrat, there has been concern that too many otters may be taken accidentally in traps set for these other wetland mammals. We know that otter numbers will never be as high as beavers or muskrats because of their need for a large territory and a large amount of food. Because of this, the Department of Natural Resources uses trapping information collected each season to help them determine population levels of the otter and to set trapping limits to keep the population at a healthy level. Click here to find out more trapping in Wisconsin.

When you're paddling along Wisconsin's rivers, lakes and streams, look carefully--wild otters are not often seen because they are very secretive. If you do see one, you will not soon forget the experience.

The Mink
The Beaver