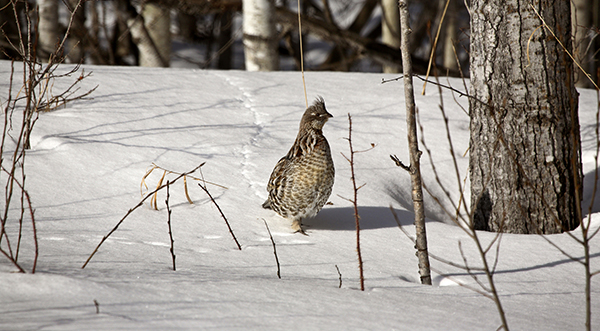 You're walking in the woods on a nice spring day, when suddenly you hear a drumming sound. "What the heck is that," you wonder? Walking very quietly, you head toward the sound. You finally locate the cause of all the racket. It's a bird, about 17 inches tall standing on a fallen log. The bird spreads its tail and presses it against the log, then begins a series of strong wing strokes. As the wings compress the air, they create a vacuum to produce a thumping noise which sounds like a distant motor. It starts out slowly, but rapidly increases to a drum roll which can be heard for ¼ mile or more. This woodland drummer is a male ruffed grouse, a chicken-like bird with rather short, rounded wings and a prominent 5-7 inch tail.

A grouse's body feathers are mottled brown with light underparts. The "ruff" feathers on each side of the neck are usually an iridescent black, but occasionally they're chestnut-colored. These ruff feathers are displayed as a large collar about the neck by males during drumming, courtship, or as a sign of dominance or aggression. The feathers on top of the head are also erected into a small crest when the bird is alerted by an intruder.

Male grouse perform their mating ritual by drumming from late March to late May. Drumming is usually performed on a log in an area with thick brush. Birds also drum on rocks and log piles. Drumming advertises the male's whereabouts and attracts a female. Once a female arrives, the male begins "strutting." He walks forward slowly with tail erect and fanned. This is followed by flaring of the ruffs on the neck, hissing, head-shaking, and finally, a run forward with the wings dragging. It's quite a display!

You may also hear a grouse drumming in summer and fall if he's defending his territory. It's his way of letting another grouse know that this spot is already occupied.

The female grouse usually builds a nest at the base of a stump or tree in a shallow depression lined with leaves. She lays two eggs about every three days. It usually takes her 17 days to lay 10-12 buff-colored eggs. Most chicks hatch after 23 days, usually in late May or early June. Within 24 hours, the chicks can walk, hop, and run. After a week, they can fly short distances. Broods (a group of young birds) are quite mobile. They travel with the hen in search of food - for the first 4-5 weeks of life it's mostly insects. After that, leaves and fruits make up the summer diet. In early September, the brood breaks up and the young grouse head out to new areas.

Ruffed grouse are well adapted for surviving Wisconsin's severe winters. They have sturdy down-curved beaks for eating buds and twigs of shrubs and trees - their staples in winter. They also have stout legs for walking or running and their feet have comb-like rows of bristles or pectinations. (Now, there's a new word for you!) These bristles act like snowshoes, enabling grouse to walk easily on soft snow. Following feeding in early morning and evening, birds spend most of the day roosting to conserve energy. If the snow condition is right (7 or more inches of fluffy snow), grouse prefer to "snow roost" to cope with the extremes of cold winter weather. During snow roosting, grouse either burrow below the surface or fly directly into a snow bank. (I'd like to see that.) Temperatures beneath this blanket of snow may be 20-30 degrees warmer than the air.

Grouse eat all kinds of food. In the spring, it's mostly buds and newly sprouted leaves of aspens, birches, cherries and apple trees. As they become available, fruits (strawberry, blueberry, bunchberry, and raspberry), seeds, and plant parts become more important. In the fall, they munch on other berries (dogwoods, viburnums), sumac, grapes, and acorns. During the winter, the grouse's favorite food is aspen buds, but it also eats catkins and/or buds of hazelnut, willow, beech, birch, maple, and some berry bushes.

The ruffed grouse is one of the most important game bird species in Wisconsin. It is also a favorite of bird-watchers and nature photographers. It is one of four grouse species native to Wisconsin. You will find ruffed grouse throughout the state, except in the southeastern counties.