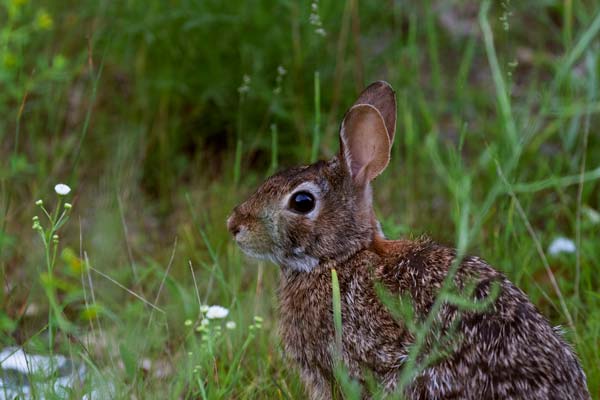 If you like to play freeze tag, you might want to take a few lessons from the cottontail rabbit. They are experts at "freezing" in place. But, they're not playing a game of tag, they're trying to stay alive. When another animal approaches, the cottontail will "freeze." By sitting perfectly still, it tries to avoid being noticed. If freezing doesn't work and the animal or person continues toward it, the rabbit will take off hopping away in a zig-zag pattern. If you have rabbits in your yard, you've probably seen this happen.

The cottontail rabbit is one of the most easy to see mammals in our state. They are abundant in the southern two-thirds of the state and in northeastern Wisconsin near cities. They are fun to watch and photograph because they will let you get pretty close before running away. Hunting rabbits in Wisconsin has always been popular and people also value these animals for their meat and fur pelts.

In case you hadn't guessed, cottontails are named for their short, fluffy white tail that looks like a big cottonball (see photo). The rabbit's body is covered with a soft pale-gray fur with black tips and cinnamon-colored fur near the neck and legs. The fur on the rabbit's underparts is bright white. Because their fur is not waterproof, rabbits groom a lot to keep the hair in good condition. Cottontails grow to about 14-18 inches long and up to 4 pounds and the females are larger than males.

Look for large and long ears that stand straight up and shift like a satellite dish to catch sounds from all directions. They have excellent sight. Rabbits usually move slowly and hop or jump short distances or crouch down and freeze to avoid predators. When they're running from predators like badgers, coyotes, and foxes or people, rabbits will run quickly, up to 18 miles per hour for up to one-half mile. You'll usually see them alone except when they have young.

It is fun to track rabbits in snow or muddy places. Look for 3 1/2 x 1 3/4 inch-long hind foot tracks that show in front of the smaller, round 1 x 1 inch front foot tracks. The feet are usually about 6 inches apart and leaps between sets of tracks are few feet apart. Rabbit tracks are pretty easy to spot.

Rabbits mate all summer (February-August) and act like they are dancing when they are interested in mating. After mating, females make a "nest" by scraping a shallow depression in the ground and lining it with grass and fur. Three to six young are born naked, blind and almost helpless after 28-32 days. Young weigh about 1 ounce and measure 4 inches at birth. They grow rapidly with nursing. By five weeks they are weaned and independent. Rabbits are considered mature at four months! Females may have up to three litters each year and can mate almost immediately after giving birth.

Cottontail teeth are adapted for ripping and gnawing on plants. Their sharp incisors (front top teeth) constantly grow, allowing them to keep gnawing away at the bark of trees and cutting plants for a meal. In summer they eat buds, sprouts and shoots of woody plants, alfalfa, clover, peas, beans, grass, dandelions, and garden plants like lettuce! In winter, they munch on tender parts on trees like apple, blackberry, birch, maple, willow, basswood and sumac.

Look for signs of rabbit feeding three feet up on young trees when the snow is deep. To keep rabbits from nibbling on your favorite plants, just screen or fence the area.

Rabbits live in a variety of habitats. Sparsely wooded areas, thick brushy areas, farmland, orchards and even your neighborhood are all places cottontails call home. They love escape routes and protection from winter in woodlots, rock or brush piles, hollow logs and shrubs. Cottontails travel a range of eight acres and can be seen year-round at any time of day or night, but are most active during dawn and dusk. If you want to attract rabbits, just make a loose pile of brush or logs, get out your binoculars, and wait. It won't be long before one of these fluffy-tailed critters comes hopping by.

The Flying Squirrel
Do You Want to Be A Badger?
Bat Facts
The Red Fox
White-Tailed Deer