The Great Lakes include, Superior, Michigan, Huron, Erie and Ontario. These lakes form the largest fresh water system on earth and they are North America’s greatest natural resource. 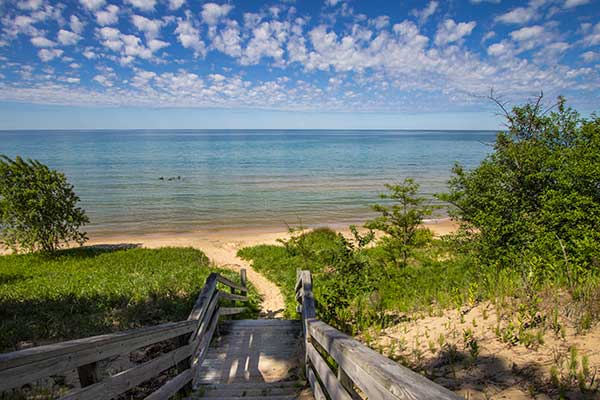 What are the Great Lakes?

The Great Lakes—Superior, Michigan, Huron, Erie and Ontario—and their connecting channels form the largest fresh surface water system on Earth. If you stood on the moon, you could see the lakes and recognize the familiar wolf head shape or the mitten bounded by lakes Michigan, Huron and Erie.

The Great Lakes, in their current state, are actually one of the youngest natural features on the North American continent. Covering more than 94,000 square miles and draining more than twice as much land, these Freshwater Seas hold an estimated 6 quadrillion gallons of water, about one-fifth of the world's fresh surface water supply and nine-tenths of the U.S. supply.

The Great Lakes system includes the five Great Lakes, Lake St. Clair and the connecting channels, along with many harbors and bays. Each lake has distinctive basin features, circulation and ecology. The Great Lakes, their respective watersheds and waterways, and the ocean are all connected. Within the Great Lakes system, water flows from Lake Superior and Lake Michigan to Lake Huron, through Lake St. Clair into Lake Erie, over Niagara Falls and into Lake Ontario before flowing through the St. Lawrence River into the ocean. Rivers and streams transport nutrients, dissolved gases, salts and minerals, sediments and pollutants from watersheds into the Great Lakes.

The Great Lakes watershed includes part or all of eight U.S. states (Minnesota, Wisconsin, Illinois, Indiana, Michigan, Ohio, Pennsylvania and New York) and the Canadian province of Ontario. Today, more than 33 million people inhabit this drainage basin: more than one-tenth of the population of the United States and one-quarter of the population of Canada. 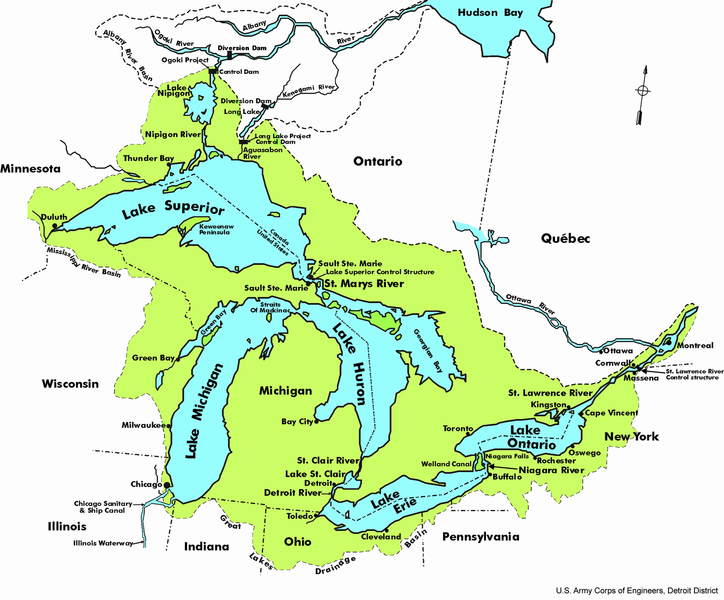 Great Lakes at a Glance

Lake Michigan, ranked second largest of the Great Lakes according to volume, is the only Great Lake entirely within the United States. Averaging 279 feet deep, the lake reaches 925 feet at its deepest point. Lake Michigan is approximately 118 miles wide and 307 miles long and boasts more than 1,600 miles of shoreline, including many sandy beaches. 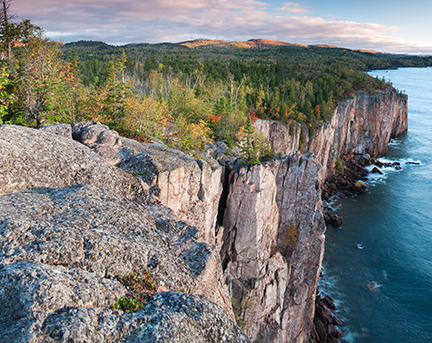 Lake Superior is located on the northern edge of Wisconsin and stretches between the Upper Peninsula of Michigan north to Ontario Canada. It also spans west to the eastern edge of Minnesota. Lake Superior is the largest of the Great Lakes by surface area and volume. It is like a mini-freshwater ocean, you can't even see the other side from the Wisconsin shoreline. 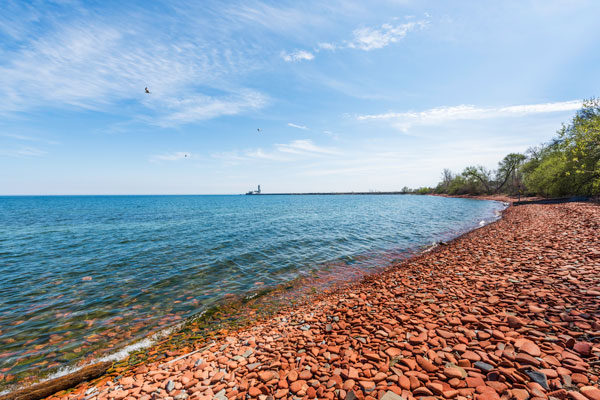 Although similar to Lake Erie in surface area and physical dimensions, Lake Ontario is a much deeper lake, averaging 283 feet. Comparing their volumes, Lake Ontario holds almost four times more water than Lake Erie. Ontario ranks fourth among the Great Lakes in maximum depth, but its average depth is second only to Lake Superior. 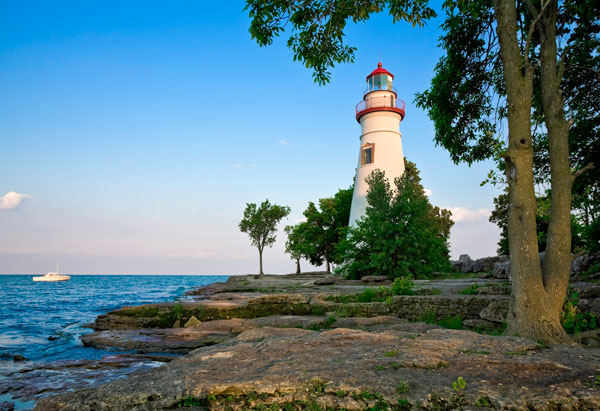 Lake Erie is the shallowest of the Great Lakes (averaging only 62 feet) and overall the smallest by volume. Erie is also exposed to the greatest effects from urbanization and agriculture. Lake Erie measures 241 miles wide and 57 miles from north to south, and has 871 miles of shoreline. Because it's not as deep as the other lakes, Erie warms rapidly in the spring and summer and is frequently the only Great Lake to freeze over in winter. 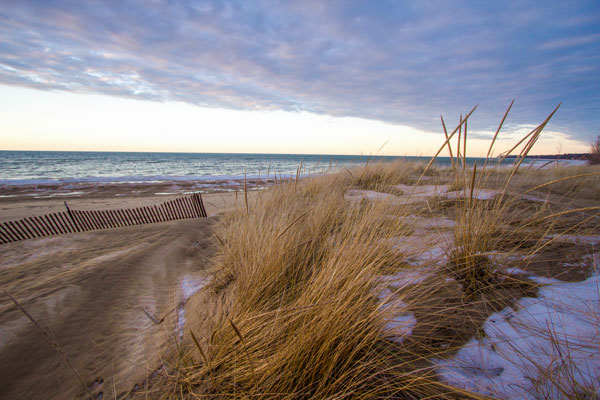 Lake Huron is the third largest of the Great Lakes by volume, holding nearly 850 cubic miles of water. The shores of Huron extend more than 3,800 miles and are characterized by shallow, sandy beaches and the rocky coasts of Georgian Bay. Lake Huron is 206 miles wide and approximately 183 miles from north to south. Home to many ship wrecks, the lake averages a depth of 195 feet.

The Great Lakes are bodies of fresh water, making them one of North America’s greatest natural resources. Natural forces formed the Great Lakes and they contain many physical features including marshes, dunes and beaches. These lakes continue to shape the features of their watershed through different level fluctuations which effects on our ecosystem. 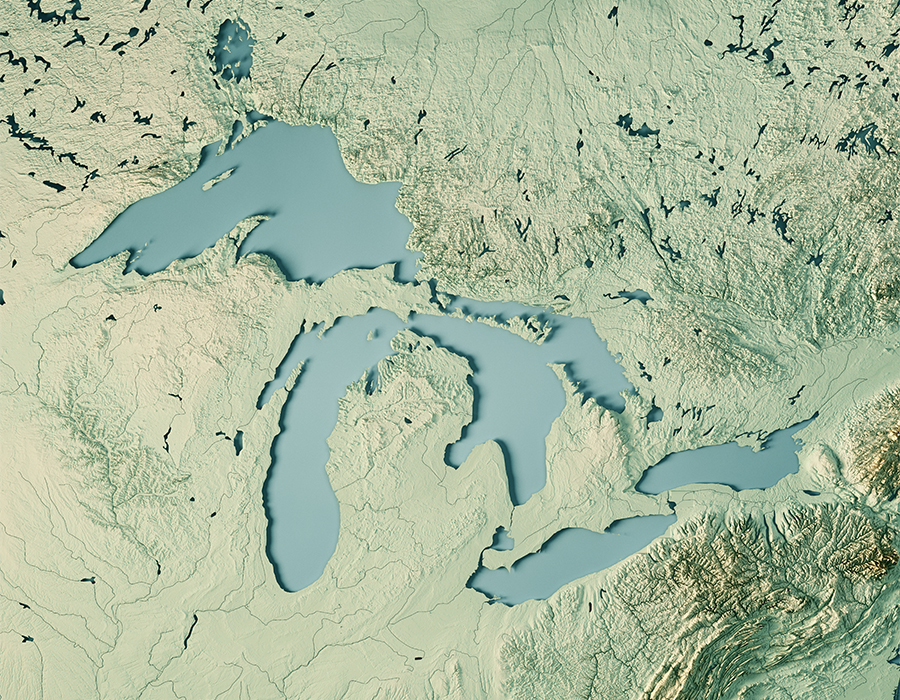 The Great Lakes contain a variety of habitats that support a broad diversity of life including several different species of plants and fish. These ecosystems each have their own range of climates and soils that support these different species. The fresh water from these lakes is also a resources that helps sustain life on land. 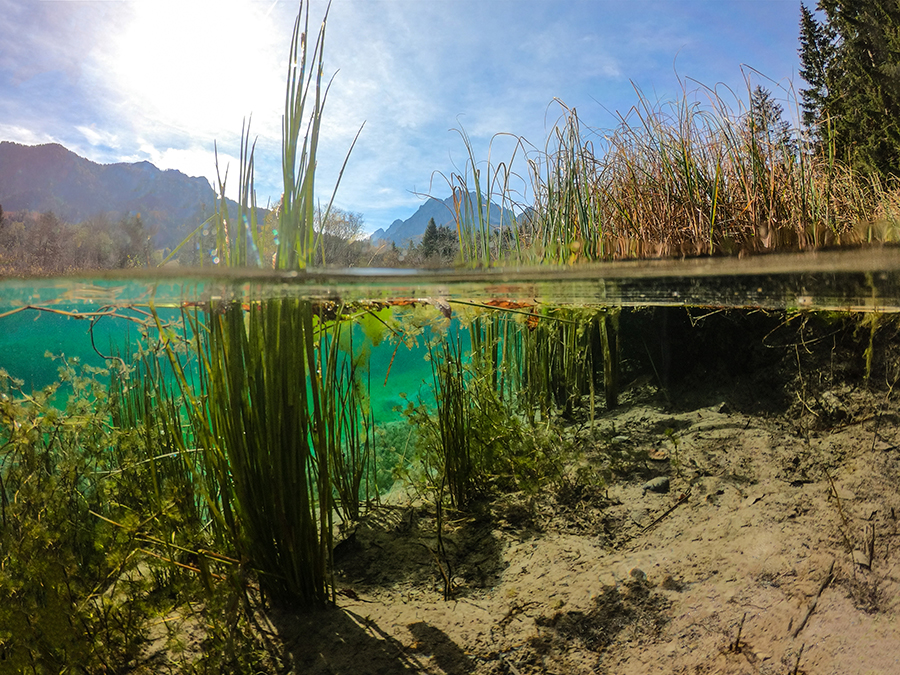 Weather, Climate, and the Great Lakes

The Great Lakes have a large influence on regional weather and climate, making it much different than what you experience inland. These large bodies of water store a lot of energy in the form of heat, impacting the weather around them. 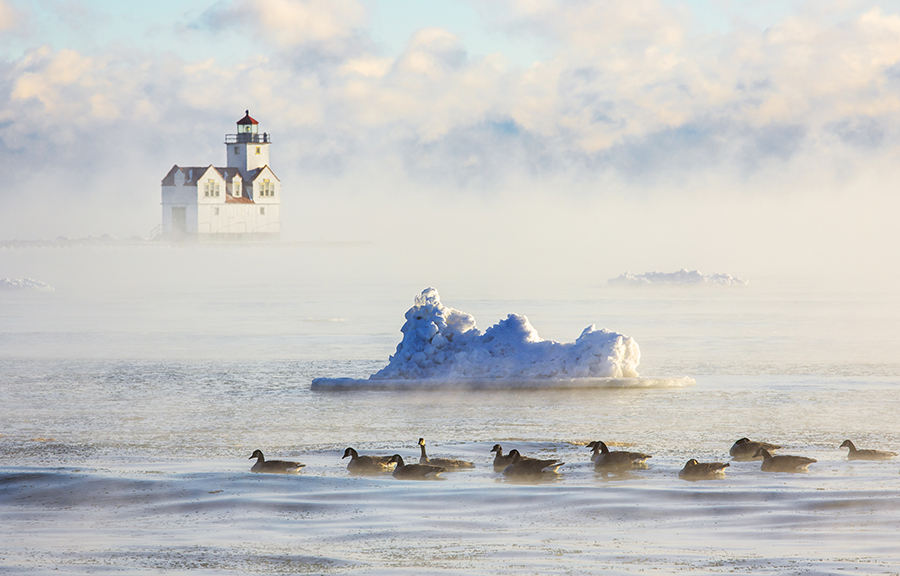 Humans and the Great Lakes

The Great Lakes are socially, economically, and environmentally significant to the region, the nation and the planet. Its important we work to take care of the Great Lakes because we are interconnected to the lakes and depend on them as a resource. 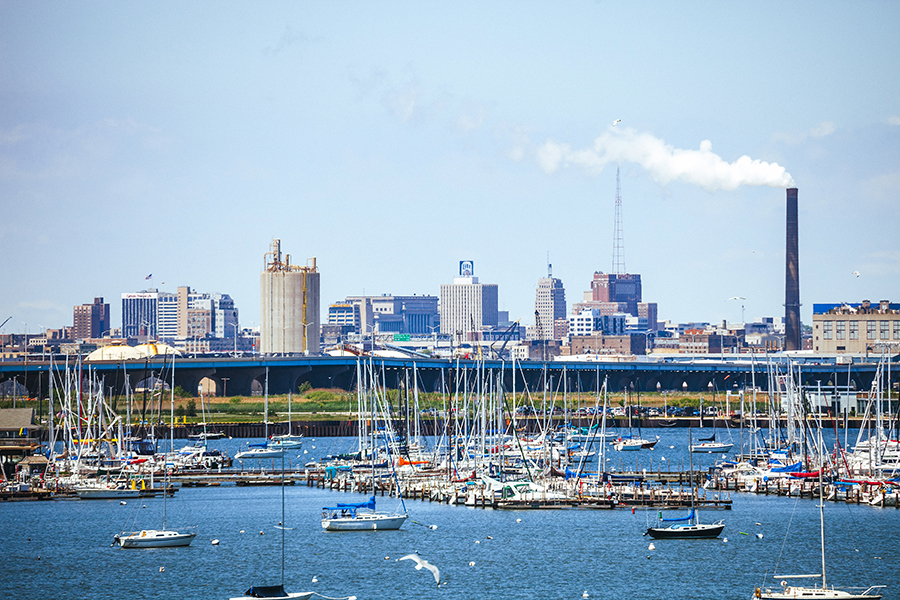 The Future of the Great Lakes

The Great Lakes are a very important part of our ecosystem and much remains to be learned about them. Pollution and urban sprawl affect the health of the waterway, the species within it and eventually our health. Its important to preserve the future of the Great Lakes so we can continue to use them as a resource.
Header Image 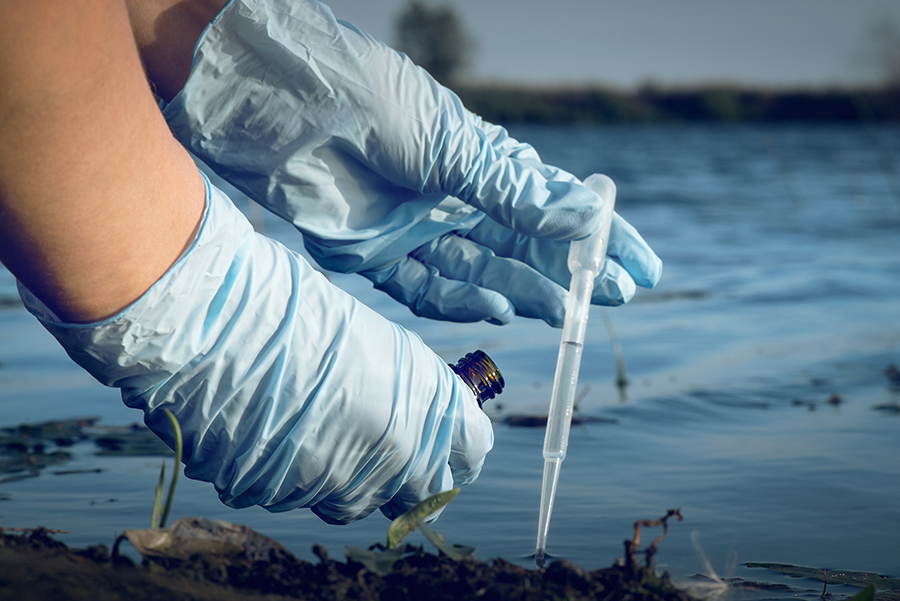