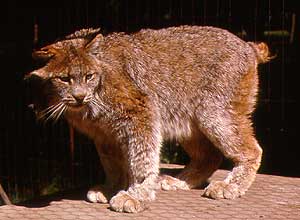 Status in Wisconsin: Taken off the endangered and threatened species list on 8/1/97. Protected Wild Animal.

Canada lynx are short-tailed, long-legged wildcats. Known by different names like "le chat," (French Canadian) or pe-zu (Chippewa), these critters look a lot like bobcats. In fact, most people have trouble telling them apart, but there are differences. The lynx has longer ear tufts. (Check out the hair sticking up from the top of the ears in the photo.) Lynx ear tufts are usually longer than 1 inch. Their tails are also different. The lynx's tail is gray with a black tip, and the bobcat's tail has narrow black bands and a black tip. Both lynx and bobcats have back legs that are longer than their front legs. This helps them in springing to catch prey

Like other members of the cat family, lynx have retractable claws (they can pull them in). They use their claws for capturing prey, fighting and climbing. In winter the large, broad paws (which are actually twice as long as the tail) act like snowshoes, allowing them to walk on the surface of the snow. This gives them an advantage when chasing prey in deep snow.

You'll probably never see a lynx in the wild. They are uncommon in Wisconsin and pretty secretive. They travel alone and at night and avoid people. We don't know much about their everyday habits.

Snowshoe hares are the main food of the lynx. They will eat other small mammals like squirrels and voles and some birds like grouse. Lynx are not fast runners. The cats rely more on stealth than speed for capturing prey. They will ambush prey from a hidden spot next to a well-used animal trail. Biologists estimate that for every animal a lynx captures, it misses ten. On average, a lynx kills every other night, eating 150-200 hares a year.

Once lynx have mated in late January or February, the male and female go their separate ways. The male takes no part in rearing young. About 60 days after mating, the female gives birth to 1-4 young, called kits. The den is in a hollow tree, log or brush pile. The kits are blind until 8-10 days-old. Their fur is spotted, but the spots disappear when they shed their newborn coat later in the spring. The female travels with her young until mid-winter, then she drives them away when the next denning season comes around. 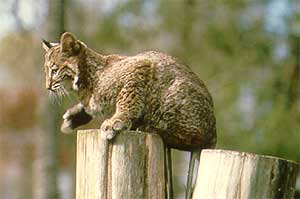 The distribution of the Canada lynx closely follows the distribution of its main food--the snowshoe hare. Lynx populations rise and fall in response to the periodic "boom and bust" population cycles of snowshoe hares. When there are a lot of hares, more lynx survive to reproduce so their numbers increase. When the hare populations crash, what do you suppose happens to the lynx? Without as much food, many lynx die of starvation. Others migrate to new areas looking for food. During these years of low numbers of hares, lynx sometimes move from Canada to Wisconsin via Minnesota. They seem to like wooded areas and it is rare to find them in prairie or farmland habitat.

Lynx have never been common in Wisconsin. At one time there probably was a breeding population of the animals, but the number declined as trappers caught lynx for the fur trade and loggers and settlers destroyed the northern forests. Around this same time people were prejudiced against predators and a state-financed bounty encouraged the killing of lynx for money. By the early 1900s, lynx no longer bred in Wisconsin. The bounty wasn't lifted until 1957.

Since 1900, lynx sightings in Wisconsin have occurred when the 10-year cycle of snowshoe hares in Canada has crashed. When this happens the animals have to wander farther to find food. Some of their wanderings bring them to Wisconsin. Biologists don't think that the lynx are breeding in Wisconsin, so all the sightings are probably just visitors, not residents.

Lynx research consists of monitoring reports of sighting and deaths. The last dead lynx found in Wisconsin was picked up near a highway in 1992. That same year a hunter mistakenly shot a lynx in northern Wisconsin. This was the last time lynx have been reported in the state. It was also at a time when the snowshoe hare population in Canada had dropped. Since the hare/lynx populations are on a 10-year cycle and the last time lynx were spotted was 1992, we may start to see a few lynx wandering in Wisconsin again.