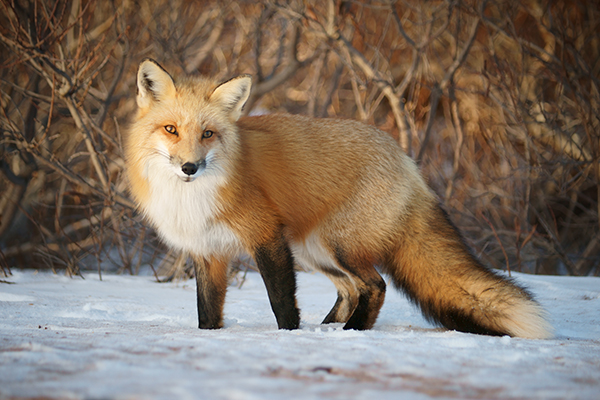 You’ve probably read stories about the cunning fox trying to outwit his animal brothers and sisters. Foxes no doubt got their crafty reputation from the way they look, with their long thin faces and yellow eyes that have narrow slits for pupils. But in real life, foxes are more concerned with finding food than with playing tricks on anyone. 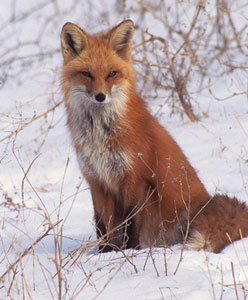 The red fox is a lean mean hunting machine that’s built for speed. About 3-3 ½ feet in length, slinky and long-legged, they only weigh 9-12 pounds full grown. But red foxes look a lot bigger because of their thick fur, which can range from deep brownish red to sandy blonde with black legs, feet and backs of the ears and white underparts. Sometimes, red foxes can even be all black or black with white tips (called “silver”), or have a dark brown “cross” across their backs.

Foxes are great hunters, and not only because they’re fast. Their large, upright ears allow them to locate a rustling sound within 1 degree of its true location. Do you have a protractor for math class? If you do, look at it to see how small a 1 degree angle is. Do you think you could pinpoint the source of a little noise in the grass within this narrow range? On top of that, a fox can hear a mouse squeal from 150 feet away—that’s 50 yard sticks end to end!

When hunting, they will slowly approach their prey, creeping low to the ground and stretching their head high to spot the prey. Then, BAM!, they pounce on the mouse, rabbit, or other prey with their forefeet. 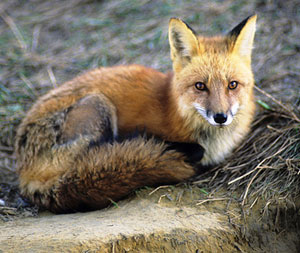 Mice, especially meadow voles, are a popular food for red foxes, but their favorite dish is cottontail rabbit. They aren’t picky eaters though, and will eat berries and insects in the spring and summer, along with squirrels, songbirds, ducks, and pheasants. In the northern part of the state they'll also eat snowshoe hares. They’ll even clean up after us humans and eat garbage.

Nighttime is the right time for red foxes to be active. They do most of their hunting from 2 hours before sunset to about 4 hours after sunrise and travel up to 9 miles a night. When they aren’t hunting, foxes like to rest in forests, ravines or woodlots, curling their long bushy tails around themselves to keep warm. 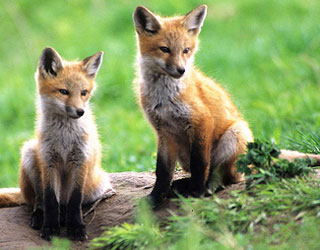 You can find foxes all over Wisconsin, especially in the southern, central and western parts of the state. Fox families each have their own clearly marked home ranges that they defend from intruders, but they don’t usually fight. A group chase or a “threat display”—charging, growling, etc.—will generally do the trick. A fox family has a hunting range of about 150-400 acres, but in less diverse habitats, like farmland, one family might need up to 2-3 square miles. Can you think of reasons why this might be?

Red foxes don’t live in dens most of the year, but do set up nurseries in abandoned badger or woodchuck burrows when it’s time to have babies. Male and female foxes breed in mid-January and have 5 or 6 pups in mid-March. Young foxes are called kits. They start hunting with their parents when they’re 3 months old, and are ready to strike out on their own after only 7-8 months.

If you look along fence rows, gravel roads, paths or treelines after a light snowfall, you might be able to find some fox tracks. The tracks are the size of a small dog’s, about 1 ½ - 2 inches long, but narrower and with smaller toe pads and more fur marks. If you’re really lucky, you might even be able to see red fox pups playing outside their den! On spring or summer evenings, search along hillsides with binoculars; if you see a mound of fresh dirt in front of a dark hole, it could be a den entrance. But remember, be careful never to get too close and disturb the family, or they might have to pack up and move. Treat red foxes with respect and you’ll be able to watch and enjoy them a lot longer.