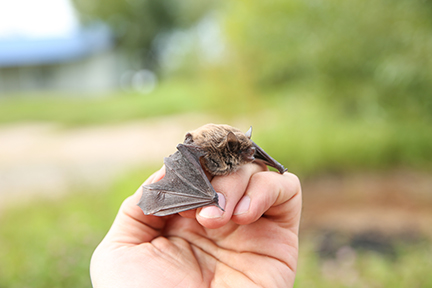 Here's the scoop on Wisconsin's bats.

This species is the most common Myotis species in the northern two-thirds of the United States. Frequently found in tree hollows and buildings during the summer, it often roosts with big brown bats. It is most likely found near rivers, lakes, or marshes. In winter, it flies to the nearest suitable cave or abandoned mine to hibernate.

This is one of the most common and widespread species of bats in North America. It roosts in colonies in tree hollows, wall spaces, and buildings. More tolerant of cold conditions than other Wisconsin bats, it is the only one that commonly overwinters in walls and attics. It also hibernates in caves and abandoned mines. It ranges in color from pale brown to dark brown with a black wing membrane.

This bat gets its name from its black to dark brown fur frosted with silver on the back. It lives in wooded areas of the U.S. and Canada and migrates south to central and southern states where it hibernates in rock crevices and tree hollows. It feeds in forest openings and along forest edges. 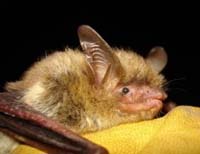 The red bat is a solitary species found most often in deciduous tree foliage during the summer. It migrates south to the central and southern states where it probably hibernates in tree hollows. The red bat has fine, silky red-orange to yellowish fur. It is often overlooked because it can appear, at quick glance, to be a dead leaf. They are rarely seen far from forested areas, and moths are their favorite food.

One of the largest bats in the United States and the most widely distributed, this species has dark yellowish fur tipped with white. It is more common in the prairie states than in the eastern U.S. It roosts in tree foliage, mostly in evergreens. Like the red bat, it eats moths. Northern populations may migrate considerable distances to subtropical areas when the weather gets cold.

This is Wisconsin's smallest bat with a body of 3 inches or less and a wingspan rarely exceeding 7 inches. Pips, as they are called, emerge earlier in the evening than most other bats and have a rather slow erratic flight pattern. They're found in wooded areas.