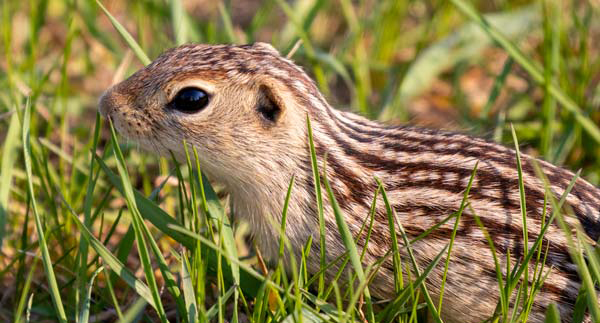 Some people call these rascally squirrels "Federation Squirrels" because of the pattern on their back and sides which looks like stars and stripes. This color pattern helps camouflage them in tall grasses from their number one predator, the northern harrier. They also like to stand at attention (this is called a "picket pin" posture) on their hind legs as they watch for danger. Usually you'll see this small 4-6 inch squirrel darting through the grass along a "runway" into its burrow entrance nearby. Not long after, they are sure to poke their heads out of the burrow to look around again. They have a light colored belly, very small ears and a 2-5 inch tail with a black stripe on the top. Watch for these squirrels on runway paths between squirrel holes during nice sunny days. You won't normally see them at night or on cloudy days. Listen for their whistle that sounds like "churr" in a high pitch. You'll find the 13-lined ground squirrel in prairies and fields, brushy areas, and in small stands of trees.

They hang out half of the time in an underground burrow. They like to keep the entrance to their hole tidy and free of loose dirt by "sweeping" with their back feet. Just inside is the entryway and then the tunnel turns in an "L" shape. This shape helps trick pesky burrowing predators, like the badger, into thinking there is a dead end to the tunnel.

The 13-lined ground squirrel burrows beneath the ground during the winter and seals the entrance before hibernating. Their heartbeat actually changes from 350 beats per minute to 5. They use up their stored fat resources to nourish them as they sleep curled up in a ball. When they wake up, they eat the food that they set aside in the fall including seeds, grains, and nuts. They also love to snack on grasshoppers and literally pounce on them every chance they get.

Meadow Vole
Do You Want to Be A Badger?