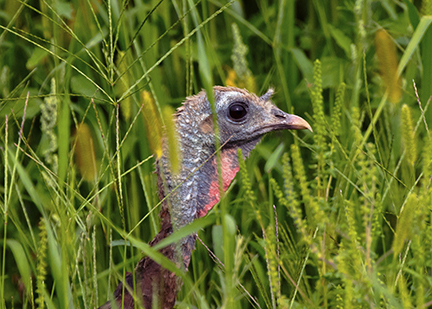 Turkey. The word brings to mind Thanksgiving feasts. But, did you know that there are wild turkeys in Wisconsin? There are, and they don't look anything like their domestic cousins. For more on the life and times of Wisconsin turkeys, read on.

Wild turkeys are native to parts of Wisconsin, in an area roughly south of a line from Prairie du Chien to Green Bay. They served as an important food source for settlers and Native Americans alike. But, by the year 1881, wild turkeys disappeared from Wisconsin. Settlement and an increase in farming and logging led to the clearing of the state's oak forests. The raising of domestic birds resulted in the spread of diseases to wild turkeys. Unregulated hunting also took its toll. The last turkey sighting in Wisconsin was near Darlington in Lafayette County in 1881.

In 1976, the Wisconsin Department of Natural Resources made a trade with the state of Missouri in order to bring wild turkeys back to Wisconsin. We gave them ruffed grouse; they gave us wild turkeys. The first 29 wild Missouri turkeys were released in Vernon County. The turkeys thrived in their new home and began to breed and increase their population. As the number of turkeys increased, the DNR began to trap them from areas with lots of turkeys and move them to other good turkey habitat areas. Over 3,000 turkeys were trapped and relocated in 49 counties. Turkeys moved into other counties on their own.

The wild turkey now roams freely in most of the state and is doing great--so great that now, like our ancestors, we are able to hunt them once again. Even the colder northern one-third of the state is becoming home to wild turkeys.

Color: shiny bronze on the body, wing and tail feathers have alternating light and dark bands. Heads are mostly featherless.

Males have what is known as a beard, a bristly mass of feathers found on the breast. Immature males, called jakes do not normally have an obvious beard. Bearded birds aren't always males. Sometimes, though not often, you'll find a female with a beard.

Males also have a fleshy growth, called a "wattle," that hangs from underneath the chin. In addition, gobblers have growths called "caruncles" (car-uncle) located on the side and back of the neck. The "snood" or "dew bill" is the fleshy thing growing above and resting across the bill. How's that for some new vocabulary words?

Turkeys are what are known as opportunistic feeders - that is they eat whatever is available. During the spring and summer, they feed on insects, berries, green leaves and grass seeds. You'll often see turkeys in fields of alfalfa searching for insects. Favorite insects include grasshoppers, beetles, and ants. Other favorite plant foods include dogwood fruits, wild grape, cherry, blue grasses, sedges, viburnums, blueberry, blackberry, buttercups and violets.

During the fall and winter, turkeys feed more on acorns and fruits of trees like oak, hop hornbeam, maple, ash, pine, and beech. Turkeys also seek out corn, wheat, oats, and other grains in farm fields. They eat a lot in late winter to store up food reserves for the breeding season. Hens eat snails and other sources of calcium and minerals to help them produce eggs. 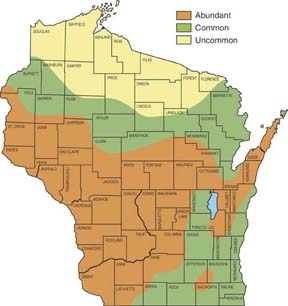 The wild turkey lives mostly in the woods. They need large trees, which provide a dependable food source and provide safe roosting sites up off the ground. They especially like oak trees. Open, grassy areas provide insects for poults (young turkeys) along with areas for winter feeding, loafing, nesting, and strutting.

Turkeys have two major feeding times, one during mid-morning, the other mid-afternoon. Family groups often meet and feed in large flocks, clipping off or ripping vegetation with their beaks. They also scratch with their feet to uncover food hidden by leaves or snow.

After feeding in the morning, turkeys often rest or begin "dusting." While dusting, a turkey wallows in loose soil fluffing up its feathers to allow the soil to penetrate the skin. Their favorite dusting places are ant beds, sandy spots, and decayed logs. Imagine rolling in an anthill! During the evening, turkeys fly up to roost in the trees of heavily forested areas. It's always kind of a surprise to see these large birds sitting up in trees.

Many animals prey on the eggs and young poults of turkeys. Skunks, opossums, raccoons, snakes, crows, coyotes, foxes, and some rodents will all look for a turkey egg or poult meal. Bobcats, foxes, great horned owls, and red-tailed hawks sometimes kill adult turkeys.

Spring is a good time to go look and listen for turkeys since it's breeding season. You can hear the toms gobbling. Turkeys make many sounds.