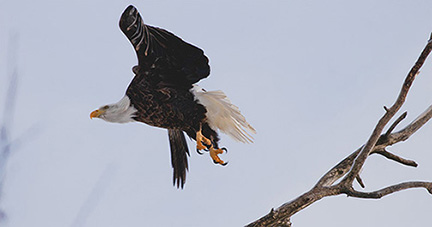 Wisconsin Status: Once endangered in Wisconsin, in 1997 the American bald eagle was taken off the list. Congratulations Wisconsin!

We all know the bald eagle as a national symbol with its distinctive "bald" white head, tail, and dark brown body. These are adult bald eagles. They get their distinctive "bald" head and white tail when they are 4 or 5-years-old. The younger birds are dark brown with just a touch of white on the underwings and tail, making it hard to tell them apart from large hawks or golden eagles. Have you ever seen one up close? You'll see that their powerful beak, legs, and eyes are yellow. 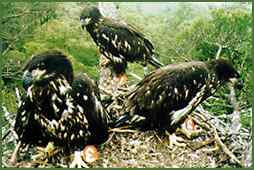 Females usually lay two, 3 inch-long white eggs in late March or early April. Both adults incubate the eggs. Within a month or so, the first egg will hatch with a fluffy white chick. Adults then feed the chicks bits of fish and protect them from severe weather and predators, like great horned owls, raccoons, and ravens. Active nests have been found both in inland nesting areas and along the major rivers in Wisconsin: the Chippewa, Lower Wisconsin, Wolf, and Mississippi. Eagles usually build their nests in tall trees, often a live white pine, with large sticks as shell and softer material as the lining. On average, the nests are about 4 feet in diameter and 3 feet deep, compare that to your height and you'll see how large they really are! Sometimes an eagle pair may just "refurbish" an old nest with new materials instead of building a new one. Just like fixing up an old house instead of building a new one.

If you're looking to see a bald eagle in Wisconsin, you're in luck. Today, they can be found in the northern two-thirds of Wisconsin. Each year since the passage of the Endangered Species Act and the ban of DDT bald eagle populations have been on the rise. DDT is a powerful insecticide which accidentally affected eagles and other birds by causing their eggs to have thin shells that broke. This kept the birds from hatching. In 1973 there were only 108 occupied eagle territories in Wisconsin. In 2010, there were 1,150 breeding pairs!

How do we know how many eagles and eagle nests there are? Well, the DNR and many partners, like the U.S. Fish and Wildlife Service and the National Park Service, have been working hard to collect data about the eagles for the last 25 years. These groups conduct breeding surveys to find out how many nests are active by flying over eagle territory to find nests, then they go back and count the young in each nest. This information is mapped using a computer program called "GIS," Geographical Information System. From this system, we can link all of the data to identify where breeding habitat can be found and predict where more eagles may nest. On the ground, volunteers also climb the nest trees and band eaglets with a metal leg band, take blood samples to check for disease or contamination, and collect vital information on eagles that have been injured or died.

Eagles were abundant throughout Wisconsin until 1800 when immigrants settled the state. Habitat disturbance, destruction, and shooting caused their numbers to drop until laws were enacted like the Migratory Bird Treaty of 1916, the Bald Eagle Protection Act of 1940, the 1972 listing of eagles as endangered in Wisconsin, and the ban of DDT. Today, wildlife biologists, scientists, and volunteers continue to work to teach people about protecting eagles and their nesting sites. About half of the eagle population nests on land that people privately own. DNR staff have developed educational materials to help people learn about eagle nest protection. We work with loggers and builders to protect nests on properties where people want to build homes and businesses, or harvest trees. We also help trappers, farmers, power companies, hunters, school children learn more about eagles. It is hard work teaching everyone about the needs of eagles and keeping track of their nest sites and numbers. You can help the bald eagle in Wisconsin by Adopting an Eagle Nest, reporting active eagle nest sites to the Bureau of Endangered Resources at the DNR and learning more about eagles.

Keep your eyes open along Wisconsin's inland riverways and lakes to see bald eagles soaring on thermals high in the air on a warm day. They can also be seen fishing with their powerful talons for suckers, northern pike, muskellunge and bullheads in the same areas. In the winter you'll find them fishing in open waters near dams along the Mississippi and Lower Wisconsin rivers in Wisconsin. Some of the best viewing places hold special bald eagle watching events in January, check them out!

A bald eagle makes it look as if it takes no effort at all for it to rise to great heights above the earth's surface. This skill is a combination of two things: the differences in how quickly different parts of the earth's surface heat up and the broad wings of the eagle.

Different temperatures on the earth's surface cause the air above these surfaces to also have different temperatures. Air over land heats up more quickly than air over water. When the warm air over the land is next to the cooler air over the water, forces are set up that make the warmer air rise above the cooler air. This rising part of the air is called a thermal. A bald eagle's wings are specially adapted to take advantage of these rising thermals of air. Look carefully though, turkey vultures also like to glide on the updrafts and may look like eagles from far away.

When an eagle first leaves its perch, it uses its broad wings and powerful flying muscles to get higher. Once an eagle is up in the air, its wide wings allow it to stay up with less work. When an eagle comes across a thermal, it can use this rising hot air to really climb. By circling over the middle of a rising thermal, a bald eagle can just spread its wings, allowing the warm air to lift the eagle to heights up to 3 miles above the surface of the earth.

You can watch bald eagles soaring high this winter. Head for places with open water where the birds can catch fish like the Wisconsin River at Sauk City. Some communities sponsor special winter bald eagle watching days.