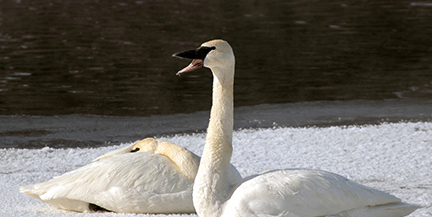 Snow-white trumpeter swans are a spectacular sight. With a wingspan of more than 7 feet and a height of about 4 feet, the trumpeter swan is the largest native waterfowl species in North America.

Trumpeters have broad, flat bills with fine tooth-like notches along the edges. This helps them strain aquatic plants and water as they feed. The birds' long necks and strong feet allow them to uproot plants in water up to 4 feet deep. They weigh between 21-30 pounds.

Do you know the name for a male swan? The male swan is called a cob, the female is a pen; and a young swan in its first year of life is called a cygnet or juvenile.

The trumpeter is often confused with the more common tundra swan, the only other native swan found routinely in North America. Tundra swans can be seen in Wisconsin only during spring and fall migration. So how can you tell them apart? Look for the following.

Trumpeter. The trumpeter swan has a deep, loud trumpet-like call.

Tundra. The tundra swan has a high-pitched, quavering call that sounds more like a Canada goose.

Both swans are white with black bills which makes it pretty tough to tell them apart, but there are some differences. If you look at a side view of the two birds, you'll notice that the tundra swan's bill is slightly dish-shaped and smaller in proportion to its smoothly rounded head. The bill of the trumpeter looks heavy and somewhat wedge-shaped in proportion to its large, angular head. The best way to tell them apart is by their calls.

There's another swan that can be confused with the trumpeter and that is the mute swan. This bird is not native to North America. European immigrants brought it to this country. It is found commonly along the East Coast of the United States and in scattered locations in the Midwest. The mute swan is considered to be an undesirable non-native species that harasses native waterfowl (ducks and geese) and uproots large amounts of aquatic vegetation. The mute swan is easily told apart from other swans by its orange bill and the prominent black, fleshy knob extending from the base of its bill to its forehead.

Trumpeter swans may form pair bonds and nest as early as their second winter. But most nest when they are 3-6 years old. They mate for life and may live for 20 years or more. If one member of a pair dies, the survivor finds another mate.

Swans usually form pair bonds on their winter grounds. The pair migrates north in the spring to nest and sometimes arrives on the breeding grounds before the ice melts. Pairs may select a nesting spot that is the same as where the pen (female) was born. The female chooses the nest and the cob (male) defends it. If a pair spends at least two summers nesting at the same spot, it will form an almost unbreakable attachment to the site.

Large, shallow wetlands, 1-3 feet deep, with a mix of vegetation and open water offer ideal swan nesting habitat. These locations provide the swans with underwater food like sago pondweed and water milfoil, as well as emergent (plants that stick out of the water) plants like arrowhead, bur reed, bulrush, sedges, and wild rice.

Nest building begins in mid-April and lasts 1-2 weeks. Nests may reach diameters of 6 feet or more. That's quite a nest! Trumpeters often build their nests on top of muskrat or beaver lodges, or they pile sedges and cattail tubers into mounds. The cob uproots vegetation and gives it to the pen, who piles it high. Then she uses her body to form a depression in the nest for her eggs. The same nest may be used year after year. Nests are usually surrounded by water. Can you guess why this is a good adaptation? It's difficult for many predators to sneak up on the pair.

Beginning in late April or early May, the pen lays one off-white egg every other day until she lays between 5-9 eggs. The eggs are pretty big- 4 ½ " long and 3" wide. The pen incubates the eggs and the cob protects the nest against intruders, including Canada geese.

After 33 days of incubation, the young are born, hatching in late May or early June. They only weigh about 7 ounces. After a day or two, they take to the water and start feeding on plants and invertebrates. The cygnets grow fast. They are fully feathered by 9-10 weeks, although they can't fly until they are about 15 weeks old. By this time they weigh about 20 pounds.

In late September, the cygnets try out their wings with short flights. This helps them get ready for migrating south just before the temperature reaches freezing. Cygnets stay with their parents through their first winter, migrating back north to the breeding area in the spring. Shortly afterwards, they are driven away by their parents. The young stick together until they're about 2 years old. Then they seek mates and a new life in a remote marsh.

Trumpeter swans were once fairly common throughout most of the northern United States and Canada. Market hunting and the use of swan skins in powder puffs and feathers in ladies hats rapidly reduced the number of nesting swans during the 19th century.

Trumpeters nested in Minnesota and Wisconsin until the 1880s. In Wisconsin, trumpeters may have nested in all but the northeastern forested regions, most likely in large marshes or shallow lakes.

By 1900, it was believed that the species had become extinct. Fortunately, a small, nonmigratory population survived in the remote mountain valleys of Montana, Idaho, and Wyoming.

In 1935, the U.S. government established Red Rock Lakes National Wildlife Refuge (NWR) in Montana to protect the remaining trumpeter swans. With protection at the refuge and in Yellowstone National Park, the swans in Montana, Idaho and Wyoming increased to 640 birds by the late 1950s.

In an effort to increase the swan population and improve their chances of survival, some trumpeters were moved to other areas with good swan habitat, including Hennepin Parks in Minnesota. Forty birds from the Red Rocks Lakes NWR formed the core of the Midwest's restoration effort in the late 1960s.

We now know that in the 1930s when the Red Rock Lakes NWR was established, there was also a flock of trumpeter swans that survived in remote parts of Alaska and western Canada. Those flocks have grown a lot and now make up the most secure population of trumpeters in North America. These birds are found in the western United States. In 2012, Wisconsin biologists counted 214 nesting pairs of trumpeters.

What you can do

You can help in the effort to restore trumpeter swans to the Midwest by learning the differences between trumpeters and other water birds and by reporting your trumpeter swan observations to local conservation officials, wildlife managers or to a DNR office. This information helps biologists track trumpeter movements.

You can also learn as much as you can about these birds and help educate others.

Keep your eyes open this spring as trumpeters head back to Wisconsin. Maybe you'll be lucky enough to see one or hear its trumpeting call.