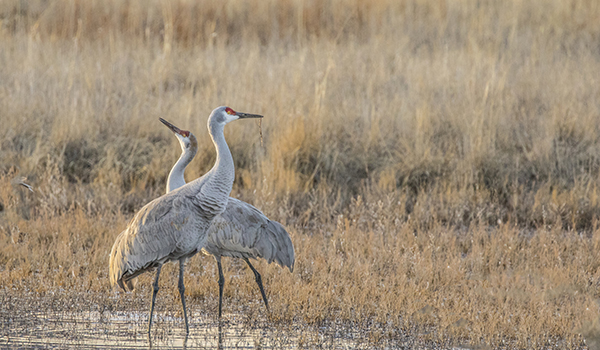 What is that large stork-like bird flying over Wisconsin's marshes? If it's huge and the legs and neck are outstretched to the front and back, it is most likely the sandhill crane. Cranes can be heard from long distances away, making a clacketty-clack and bugling call. Have you ever heard this sound? You can find sandhill cranes throughout most of North America, nesting from the sub-artic regions of Canada and Alaska, south to the Gulf States.

Sandhills are one of two crane species found in North America. The other is the whooping crane, an endangered species, which has been recently reintroduced to Wisconsin. Unlike, its white whooping crane cousin, the sandhill crane is a tall gray bird. It has a huge wingspan of 6-7 feet! While the birds are tall, they only weigh between 8 and 11 pounds. Adults have yellow eyes, black bills, legs and feet, with a bright red patch on the crest of their head. Males and females look nearly alike. In the spring, they actually "paint" their feathers with mud to camouflage themselves in brown grasses. In the summer, many people confuse them with the great blue heron since they are similar in color and nearly the same size. When you see a large bird in the sky, you'll know it's a sandhill crane if the neck is outstretched and the downward flap of the wings is followed by a quick upstroke. The great blue heron has a black eye stripe, flies with their neck folded back, and their wing strokes are even.

Sandhills Have Some Great Moves

Sandhill cranes are on the move in fall and spring when they migrate to and from Florida where they spend the winter months. They return to Wisconsin's marshes in March. Cranes select a mate when they are 4-years old and live as many as 25 to 30 years with the same mate. Crane families migrate south together.Young birds that have outgrown their parents, hang out together in groups of 20, called a "bachelor flock." They migrate and feed together at night in open woods and fields away from the marsh.

When sandhill cranes are ready to mate, they begin a unique courtship ritual. The cranes have a series of dances that they do while making calls. The dance looks like two marionette puppets frolicking delicately on strings. They alternately bow and leap into the air with wings stretched out as they circle each other. While they dance, the pair lets out a series of loud calls. The male utters a note followed quickly by the female's two-note answer. Sometimes you can hear them from 2 miles away on quiet spring mornings. After their dance, they build a nest near open water in a grassy area. The nest is made with piles of grasses heaped across 5 feet. Females will lay one or two eggs in the nest and both birds will incubate them. Chicks are born in 30 days and have fuzzy yellow-brown feathers. They're usually born in mid-May in Wisconsin. Birds will renest if they lose the eggs to predators. Chicks can fly by mid-July and families feed together on tubers (a swollen underground plant stem, like a potato) worms, grasshoppers, snails, frogs, seeds, and sometimes snakes, small birds and mice. Cranes can be a problem for farmers when they pull up sprouting corn in spring time and eat large amounts of farm field grain in the fall.

In the fall, cranes "stage" (gather together in groups of several thousand) in larger wetland areas in Wisconsin like: Crex Meadows, White River Marsh, Sandhill State Wildlife Area, Necedah National Wildlife Refuge and Comstock Marsh. Wait and watch at one of these marshes in the fall at sunrise to see huge flocks take flight to feed in area fields.

When winter falls on the Wisconsin landscape, cold mid-November winds will carry the cranes circling up to heights of 5,000 feet to catch stiff north winds on their road to southern climates.

A Lot of History

In the 1800s, sandhill cranes were in trouble. The land they lived on was destroyed by speculators and they were hunted to near extinction. In 1916, the federal Migratory Bird Treaty Act was signed, protecting the remaining birds in Wisconsin, Michigan, Minnesota and Ontario, Canada. A central area in Wisconsin was set aside to give the birds a place to breed. Today, the crane population is in good shape, benefiting from habitat restoration projects around the state. You can help cranes and the biologists who manage them, by getting involved with the annual "Crane Count." Since 1976, the International Crane Foundation in Baraboo, Wisconsin, has held an annual state-wide count in early April. Give them a call at (608) 356-9462 for more information or to see 15 different types of live cranes up close.