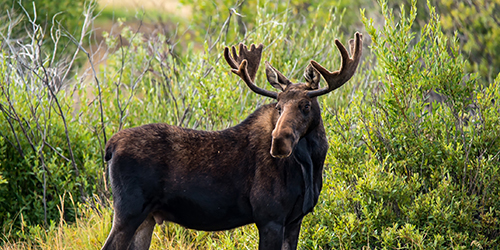 Moose on the Loose!

How do you get a 900 pound moose to stand still and let you put a radio-collar on her? Yell, "Hey moose, come here!" Nope, you approach cautiously with a dart gun to try to immobilize her.

Wisconsin and Michigan biologists recently took part in the first ever capture and radio-collaring of a moose in Wisconsin. The moose, collared first in Michigan, has moved to Wisconsin and biologists needed to replace her old collar with a new one. (The collar gives off a signal that allows biologists to keep track of her movement.) Here's what happened according to one of the biologist's diaries... 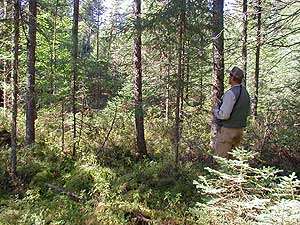 "She was located in Forest County on September 12. Dean with a dart gun, Brian with a telemetry receiver and I began to approach the moose from about 0.3 mile away. We got within 120 feet of her. Dean approached within about 60 feet to where the moose was bedded down in a tamarack and spruce bog. He was able to get off a shot as the moose got up from her bed. We waited a few minutes to search for the moose, and found her pretty quickly." 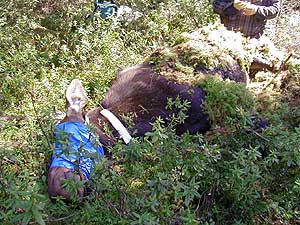 "The immobilization drug seemed to work well, but the moose continued to respond to slight noises or activities, such as ear tag attachment and collar replacement. Her initial temperature was 101 degrees F. After about 10 minutes, it had gone up slightly to 102 degrees F. We kept her cool by placing sphagnum moss on her. Dean collected blood samples. The reversal of the immobilization drug was administered about noon, after we got her up in a prone position. She was up on her feet in about 5 minutes. She stood up, looked at us, and began to browse on nearby shrubs. Then, she wandered off into the brush, eating shrubs along the way, and occasionally looking back at us." 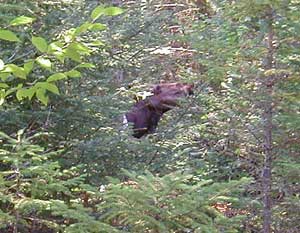 "The moose appeared to be in very good shape, and probably weighed about 900 lbs. She was initially caught in Michigan last winter, and made her way into Wisconsin in May. Mike Weinfurter, Wisconsin DNR pilot, has been monitoring her movements ever since. She has been occupying a regular home range area of about 20 mi2. We found no evidence that she had a calf.

The new radio collar should be good for another 8 - 9 years. We should be able to see if she goes back to Michigan over winter, or decides to stay in Wisconsin."

Wow! It sounds like they had a pretty exciting day. If you're up in Forest County, keep your eyes open for a moose on the loose and watch for their tracks.