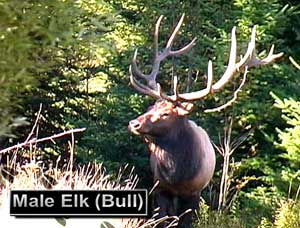 If you visit northern Wisconsin forests in the fall around September or October, stop and listen for squeals, barks, and high-pitched whistle sounds. What kind of animal do you think it could be? A mouse? A bird? Here's a hint... The animal's name looks like EEK but one of the letters is different - the answer is Elk!

Elk roamed throughout North America before the 1800s. The elk population has been dramatically reduced since the 1800s because of human population growth and over-hunting. Many Native American tribes hunted elk for their hides; bones and antlers to make weapons; teeth for decorations; and many other uses. Then, Europeans began settling the continent and also hunted elk for their meat, hides, canine teeth, and antlers. Today there are about one million elk in North America.

Elk are members of the deer family along with moose, caribou, mule deer, and white-tailed deer. Their body color varies from deep coppery brown to light tan, depending on the season and where they live. For instance elk that live in hot, open areas like California, have light colored coats to keep themselves cool. Elk living in dense forests, like northern Wisconsin, do not get a lot of sun. They have dark, thick coats to absorb the sun and keep themselves warm. Also, the elk's legs and neck are often a darker color than their body.

Elk are much bigger than deer. An average bull (male elk) weighs 700 pounds and stands 5 feet at the shoulder. White-tailed deer and mule deer usually weigh 180-275 pounds and are much smaller.

Each year in the spring, male elk and deer start to grow antlers. As elk antlers grow, they extend behind the elk's head, rather than growing tall and pointing forward like the white-tailed deer. As the daylight increases, changing hormones cause the antlers to grow faster. The antlers do not turn into bone until late summer. Until then, the antlers are covered in velvet - a soft protective layer that helps the blood flow. The velvet falls off or is rubbed off the antlers by males in August when the antlers are full grown.

In the spring, elk young, called calves, are born with white spots similar to the white-tailed deer fawn. Calves hide for a couple of weeks after being born to avoid predators, just like deer. They feed on milk from a cow, but not a holstein, the female elk is called a cow.

Like deer, elk also have large, dish shaped ears which they rotate to pick up noises from different directions.

Animals that prey on elk in North America include mountain lions, wolves, coyotes, humans, black bears and grizzly bears. In northern Wisconsin, black bears and timber wolves and humans (by accident) are the major predators.

Elk have unique characteristics that help them survive. One example is the elk's four toes on each leg. Elk use their back two toes (dew claws), found on the back of their legs, for balance and grip. The front two toes are covered with a thick toenail (hoof) and this is how the elk walk. Did you know that elk can run up to 35 miles per hour on their tiptoes?

Another unique characteristic is their eyes. Elk have eyes on the sides of their head which allows them to see in almost any direction except behind them. Believe it or not, even though hunters wear blaze orange, elk cannot see them because elk cannot see color.

Home on the Range

Elk are found in many types of habitat in North America including temperate rain forests in Washington, valleys of central California, and the alpine regions of Colorado. Elk live in Wisconsin once again thanks to a reintroduction program that placed an experimental herd in the Chequamegon forest near Clam Lake.

The elk usually live in transition zones between forest and meadow. Historically, elk ranged over the entire state. Even though elk lived in the prairie and savanna lands of southern Wisconsin, most of that land has been changed to agriculture. Today, the best elk habitat can be found in northern parts of the state. The Wisconsin elk were released into a habitat that includes mostly forest with northern hardwoods, aspen, swamp conifer/hardwoods, jack and red pine.

Elk mainly roam an area of 315 square miles in Wisconsin and may travel up to a 404 square mile range. This area includes Bayfield, Ashland, Sawyer, and Price counties. Check out this map of the elk range.

The elk's diet, depending on the season, is made up of eating grasses and bushes, stripping and eating the bark of aspen trees, and also eating lichens that grow on mature trees. During the spring, elk graze on different types of grasses. In the summer, elk continue to graze on grasses, broad-leafed plants, tree leaves, and shrubs. In fall, elk will also eat mushrooms when they're available. When winter comes, elk will munch on twigs, bark, needles of trees and shrubs, and tree lichens. Elk have a four "chambered" stomach which digests this smorgasbord of food.

Elk also need water in their diet to survive. In the winter, elk eat snow. On hot summer days, elk need lots of water from streams, ponds, or other water sources. Sometimes they even dunk themselves to get rid of biting insects and to cool off.

Also, when elk walk they make slight cracking noises (like when you crack your knuckles). The cracking tells them it is another elk rather than a predator.

Bringing Back the Elk

Elk once lived in Wisconsin, but numbers dropped with increased hunting and changing habitat until no more elk roamed here. In May of 1995, The University of Wisconsin-Stevens Point decided to conduct an elk study in the Clam Lake area and released 25 elk in the Chequamegon National Forest in northern Wisconsin.

Department of Natural Resources (DNR) biologists have been monitoring the elk herd to learn more about their population, movement, and habitat use in our state. About 35 percent of the elk are monitored through the use of radio collars that are placed on the elk's neck. Biologists also monitor elk by counting them visually, conducting aerial surveys with planes, and by more radio-collar monitoring.

Enjoying the Elk in Wisconsin

According to DNR biologists, September is the best time in Wisconsin to hear elk bugle. The U.S. Forest Service is constructing two elk viewing areas for the enjoyment of wildlife enthusiasts. Currently, some of the best places to listen or see elk are in the Chequamegon National Forest. Look for the many elk crossing signs located south of Highway 77 and Clam Lake and to the west of County GG.

If you visit elk country, remember to use extra caution not to disturb the animals because any disturbance in the fall can change elk behavior. If you really want to go elk watching, here are some hints to make your experience more worthwhile and safe. Remember to think about how you are affecting the elk and their habitat and keep your distance!