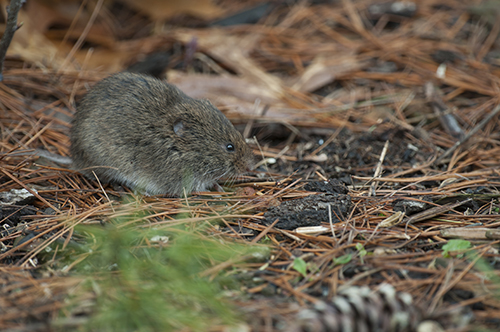 This small creature, also known as the field mouse, measures 3-5 inches long with a 1-2 inch hairless tail. Meadow voles stay well hidden between and under thick clumps of grass in grasslands, open forests, orchards, prairies and the edge of forests. Look for brown to dark brown fur on their sides and back. They have small, beady eyes. Their long, soft fur hides their small ears. Like the 13-lined ground squirrel, this small mammal lives above ground and in burrows in the ground. They create a pathway between entrance and exit holes called "runways." These small rodents can be active at any time of day or night. But, they're usually out at night in the summer and daytime in the winter. If you really want to see one, look in the grass at dusk and dawn. Meadow voles are usually seen running and can reach speeds up to 5 to 6 miles per hour! They are also great swimmers and can even dive, but look out, believe it or not, the muskellunge and northern pike like to eat them.

They only live for about a year. During that time, they reproduce, give birth to as many as nine young per litter and have many litters per year. Usually there are several hundred meadow voles per acre. With these kinds of numbers, they can really be destructive to crops like hay, but predators like hawks, fox snakes, and owls help keep their numbers down. They also crave the seeds from pine cones and fresh grass and sedges.

In the wintertime, the vole's life changes. They live above ground, but under the snow where it is warmer than the open air. Meadow voles must find food above ground and they will gnaw on the bark of bushes for nourishment, leaving behind fine tooth marks. Voles are easy to find in the winter by their "runways" in the snow that are lined with grass and other material from where they were digging. They also build a nest on the ground made of grass with one entrance through the snow. Look in the snow and you may see it mounded up from snow runways. Sometimes voles will surface from the snow and leave tiny tracks showing where they've been. Look in a mammal-tracking field guide and see if you can identify their tracks.

Do You Want to Be A Badger?
13-lined Ground Squirrel