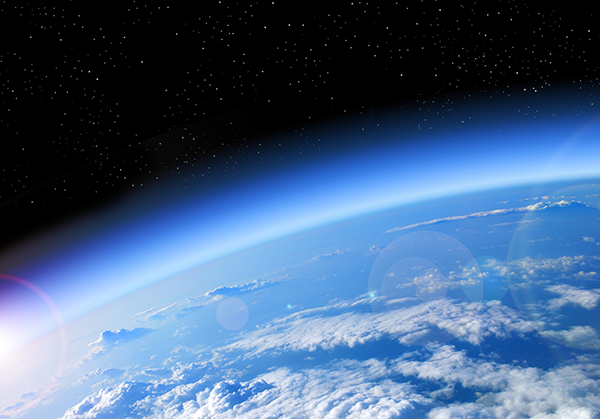 How it all started

In the late 1920s, chemicals called chlorofluorocarbons (cloro-floro-carbons) or CFCs, were invented. These chemicals were not poisonous and didn't harm fabrics, plants or people. Companies thought they were great and used them in refrigerators, air conditioners, styrofoam packaging, and spray cans.

From the 1920s to the 1970s, billions of CFC molecules were released into the air.

In the 1970s, scientists began to wonder what might happen to all those CFCs after they had been in the air for a while. They eventually learned that CFCs could float past the troposphere up into the stratosphere where UV rays would break them down. The chemicals that make up CFCs, mainly chlorine and fluorine, would float around the stratosphere, breaking up ozone molecules.

This was bad, because scientists knew that ozone in the stratosphere protects the Earth from too many UV rays.

In 1979, many countries, including the U.S., banned CFCs from being made or used. This was a big step toward fixing the problem. Today, no spray cans contain CFCs. Other chemicals are gradually replacing the CFCs in air conditioners.

Scientists originally predicted that the ozone layer would be the thinnest around 2008, then start recovering. But new research shows that other air pollution problems are slowing down the ozone layer's ability to rebound.

What you can do

Jeepers, creepers, how do you protect your peepers?
Everything You Need to Know About Ice Fishing
Is it Ozone Damage?
Smokey Bear's Seven Campfire Safety Tips
Canoe Safety Tips