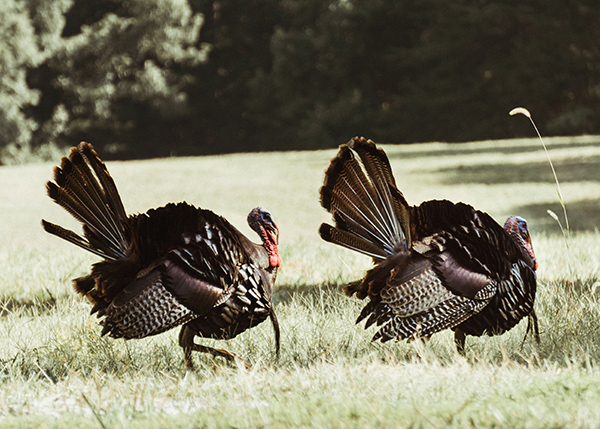 There are two times of the year when you can hunt turkeys, spring and fall.

You need a permit to hunt turkeys. Read about the next turkey hunting season (Leaves EEK!)

Turkey hunting takes a lot of patience, but it's great to be out in the woods early in the morning watching and listening for wildlife. Spring turkey hunting involves making hen turkey sounds to try to get a gobbler to come near you. In the fall turkeys aren't mating, so making hen sounds won't bring gobblers to you. Fall turkey hunting usually involves stand hunting--finding a good spot and waiting patiently or stalking and trying to sneak up on one. In the fall you can hunt either a gobbler or a hen. 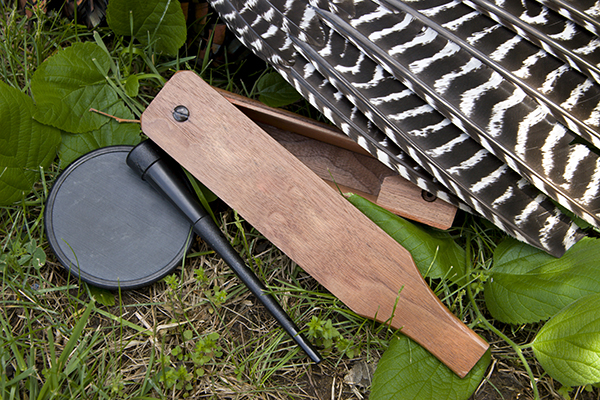 If you're spring hunting, there are a number of turkey calling devices you can use to make a turkey sound. There are two main types: friction calls, which produce sound by rubbing two surfaces together; and mouth calls, through which air is inhaled or exhaled. Another type of caller, a shaker, produces gobbles when you shake it in a rapid motion.

No matter what type of call you pick, it's important to practice, practice, practice. In order to learn turkey calls, you'll need to listen to live turkeys, a calling recording, or get help from an experienced turkey hunter. Turkeys make more than two dozen different calls, but most hunters only notice about 10. There are nine basic sounds you should be able to recognize.

Tree yelp. This is the first turkey sound heard in the morning. It is a slow, soft, nasal sound, made of 3 or 4 yelps. It is made only at daybreak from the roost. It is a turkey greeting call to make sure that all is well after a dark night of not seeing or hearing one another.

Plain yelp. The sound is one of the ones most people associate with turkeys. They use this sound to communicate with birds far away. This sound is made by both male and female turkeys in the fall, winter, and spring.

Cluck. This sound is a short, soft, single-syllable, non-musical tone. It is used to get another turkey's attention.

Purr. Like the name implies, this is a soft call used by turkeys when communicating.

Putt. This is a short, sharp, loud cluck. It sounds very similar to the cluck, only the cluck is softer and less distinct.

Mating call. In the spring, this is heard as three yelps rising in volume, a pause, then two soft clucks.

Cackle. A cackle is an excited call of a hen and is often heard when the bird is flying down from a roost. It is usually a series of 12 or more yelps which rise in pitch and then gradually decline.

Cut. A cut is a short, staccato yelp and is usually made by the hen in a series, varying in length.

Gobble. This is the sound most of us think of when we think of turkeys.

Take to the woods with Kris and his dad, Chris, as they try to call in some turkeys. |LS|VIDEO Length 3:45|RS|

If you're heading out in the woods for turkey hunting, take care to be safe. Follow these simple rules.

You must be extra careful when turkey hunting because you're dressed in camouflage. It's a good idea to wear a blaze orange cap or gloves while walking. You can take them off when you're ready to hunt. Most turkey hunting shooting accidents occur because one hunter mistakes another hunter as game.

You should find a hunting spot that allows you to rest your back against a tree or some other object that is as wide as your shoulders. This helps protect you from not only an errant shot, but from the good vision of the turkey.

If you're interested in turkey hunting and would like to know more, a good place to get started is at a turkey hunting clinic. Clinics are held around the state to teach you turkey hunting techniques, safety, and all the information you need about the turkey's lifecycle and how their habitat is managed in Wisconsin. The clinic involves demonstrations, slides, videos and a discussion of the basics of both spring and fall turkey hunting. You'll walk away knowing calling techniques, how to scout, tips for bow hunting, and you'll also take home a free Wisconsin Turkey Hunter's Guide. Click here to learn more about turkey hunter education clinics

Have fun and be safe.