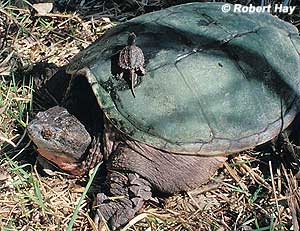 Have you ever seen a turtle sunning itself on a log on a warm, Wisconsin summer day? Most of us have. Turtles, with their amazing colorful skeletons, are different from the other reptiles. Besides sporting their house on their backs, they are also slow-moving on land. This sometimes gives us a chance to get a good look at them.

Do you want to know what a scute, egg tooth, and plastron are? Read on for some fun facts about these slow-moving, colorful critters.

Turtles are believed to have existed on earth longer than any other group of reptiles. Fossil records suggest that they were present as long as 200 million years ago and that they haven't changed much since that time. They are also believed to be one of the longest living creatures. Some species live past 100 years of age. There have been individual turtles that made it to 200 years-old. How can we know that? Turtle harvesters report that some alligator snapping turtles harvested in recent years have had arrowheads and musket balls lodged in their shells. How long ago did we use muskets in this country?

Where Do They Go in Winter?

Ten of Wisconsin's 11 turtle species spend the winter under water. Some bury themselves under the bottom while others lie on the bottom and remain motionless. Recent studies show that many turtles don't actually hibernate. The remain semi-active, moving about during the winter. Because winter takes a toll on body reserves, many species begin to emerge as soon as the ice starts to melt around lakes, ponds, and streambanks. Turtles will come to bask on sunny days in early spring when air temperatures near 50 degrees Fahrenheit. Of course, the ice has to have melted enough so that they can get to the shoreline.

If you were asked what makes a turtle a turtle, you might answer, "its shell." The shell is certainly the part of a turtle that gets it noticed. The turtle shell is made up of about 60 different bones. The top of the shell is called the carapace, the bottom is the plastron, and the pieces that join top and bottom together are called bridges. The turtle's ribs and backbone are fused to the carapace.

Scutes (large scales) cover the shell and help keep bacteria and fungi from invading the underlying bone. Scutes are made up of keratin, similar to what makes up our fingernails. The scutes also contain all of the shell's patterns and colors. Wisconsin's two softshell species of turtles don't have scutes. They have a single leathery covering over their bone and cartilage shell. Hatchlings and young turtles are especially vulnerable to predators because their shells are not entirely hardened.

Where do you often see turtles? You probably spot them basking on floating logs or other debris. Basking is important for regulating a turtle's body temperature and it aids in digesting food. Vitamin D is needed for the turtle to absorb calcium from food. Why do you suppose that this is important? Calcium is important for shell development in younger turtles and it's needed for producing healthy eggshells in female turtles.

All turtles lay their eggs on land, most in a nest that they dig. Most nest once a year, but some painted turtles and map turtles may nest twice in the same season. Nesting usually occurs around or after dusk, but it may also happen near dawn or even occasionally during the day. Smaller turtle species lay about 3-5 eggs while larger turtles like the snapping turtles lay from 30-80 eggs. Once the eggs are laid, the female turtle leaves them to hatch on their own. Turtle eggs are often uncovered and eaten by foxes, raccoons and skunks.

Eggs incubate from 60 to 90 days in Wisconsin, depending on the species. During a cool summer, it might take even longer. Some eggs laid late in the season may not hatch until the following spring. Those that hatch in early fall, will overwinter in the nest. A glycol-like antifreeze keeps the eggs or hatchlings from freezing during the winter. But, if the winter is very dry or cold with little snow cover, many of the eggs and hatchlings will die.

Compared to other animals, turtles are very slow to mature. Female Blanding's turtles may take from 17-20 years to reach sexual maturity. But, since turtles are generally long-lived creatures, this hasn't been a problem. The fact that turtles can live and reproduce for many decades is probably why they have survived for so long. But, recently, human activities have increased the death of adult turtles. Many turtles are killed by cars as they cross roads. Also, our elimination of large predators has allowed medium-sized predators to increase. These medium-sized predators like foxes, raccoons, and skunks have increased the predation on turtles nests. We'll have to keep a close eye on turtle populations.

What's on the Menu?

Turtles are toothless. They have sharp, horny beaks, kind of like a bird beak. They can grab and slice food. They usually feed on plants or on slow-moving prey like earthworms, slugs, snails, or insect larvae. They have a keen sense of smell and for some turtles, color, especially red. When they find prey, they typically feed by seizing it and swallowing it whole, or they take their powerful foreclaws and tear the food up. Well-camouflaged snapping turtles will often sit quietly at the bottom of ponds, lakes or streams, and when an unsuspecting fish or other prey wanders too close, these turtles use their powerful necks to strike out while opening their mouths. This creates a vacuum that sucks the food into their mouths.

Turtles don't feed much when the water temperature is below 65 degrees. This means that many turtles, especially in northern Wisconsin, may not feed for a period that equals a normal school year (September - early June). This makes for a very short growing season for turtles.

If you had to guess what the biggest threat is to Wisconsin's turtles, what would you guess? If you said "habitat loss," you would be correct. Wisconsin has lost over half of its wetlands since European settlement. Urban sprawl, including the construction of new roads, permanently removes habitat. Turtles are no match for automobiles. Development around lakes and rivers also affects turtles. As shoreline habitat is developed there are fewer places for female turtles to nest. In order for populations of turtles to survive large areas of habitat that aren't broken up by development and roads must be available.

Another threat to turtles is the increasing number of medium-sized predators that eat turtle eggs, hatchlings, juveniles and adults. These predators include free-roaming cats and dogs, raccoons, skunks, and coyotes. In some areas turtle nest predation rates range from 90-100 percent. That doesn't leave very many young turtle survivors.

Five of Wisconsin's 11 turtle species are listed as endangered, threatened or of special concern. The recovery of many turtle populations is often slow. Turtles are slow to mature so it takes a long time for turtles to rebuild their populations--longer than most other animals. Blanding's turtles, which are listed as a species of "special concern" in Wisconsin, must live 17-20 years before they can breed. So, you can see how once turtle populations drop, it can be tough going to get them built up again.