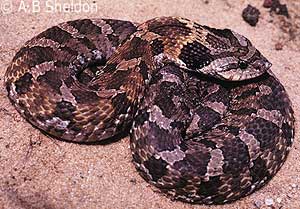 This is one interesting snake and not just because of its sharply upturned nose, which earned it the name "hog-nosed." And, it's not just because of the pair of dark black blotches on its neck that resemble "eyespots" when it flattens it neck. (These eyespots scare animals away that are thinking of making this snake their lunch.) 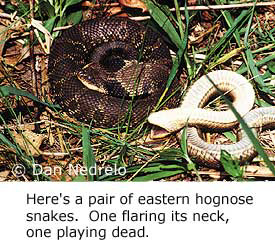 It also has some very interesting behaviors. If the eyespots don't scare off a predator, this snake tries playing dead. First, it will flip over onto its back, wiggle around like it's in pain, and then it regurgitates (barfs). Yuck! It then "dies," by laying very still in hopes that the attacker will go away.

How can you identify this snake? Its behavior is certainly one way. But, if it's not flattening its neck or playing dead, look for a medium-sized snake with a back that has dark brown blotches on a brown-gold background. Its underside varies from streaks, spots, or blotches of yellow to gray or pink. Large, older snakes may be brown or gray with the pattern seen here.

Watch for these snakes in grassland, oak savanna and sand prairies, but also in southern forests. Toads are their preferred food, but they'll eat other amphibians too.

You're in for a real treat if you come across one of these great actors of the reptile world.