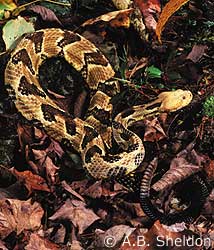 These snakes live among the rugged open bluffs of southwestern and western Wisconsin. In the summer some timber rattlers move into deciduous forests and croplands. They eat a variety of rodents.

This species doesn't rank high on many people's favorite animal list. Fear and misunderstanding has resulted in many timber rattlesnakes being killed, which is the primary reason that it is listed as a protected wild animal.