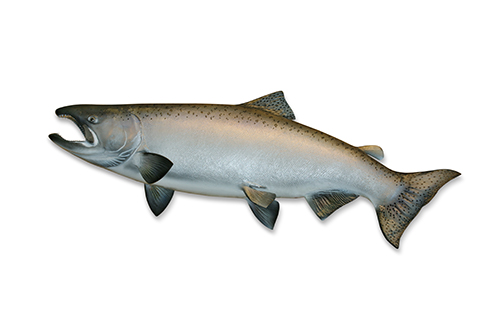 You may know this fish by another name such as king salmon, spring salmon, blackmouth, tschawytscha, chin, king, magnum, or shaker. Whatever you decide to call this 20-35 inch-long salmon, it will always have black spots and iridescent green to blue-green color on its back and top of the head. Its sides are silvery, turning to white on the belly. To tell the chinook from other types of salmon, look for the unique grey or black mouth, black gums, and a squared tail with spots on the entire tail, and 15-19 rays in the anal fin. The "king" usually weighs from 5 to 35 pounds, with the state record being 44 pounds 15 ounces and 47.5 inches long. It was caught on July, 19, 1994 in Lake Michigan near Door County.

Believe it or not, the salmon is not native to the Great Lakes. They were introduced into the Great Lakes beginning in 1877. By 1969, DNR fisheries managers began stocking chinooks to control alewives, an exotic species that had a population explosion because sea lampreys had eaten their main predators. Today chinooks can be found in all of the Great Lakes and make great sport fish to catch.

Wisconsin raises the chinook salmon in fish hatcheries and stocks (releases) the young, called fingerlings, in streams that run into Lake Michigan. You'll find abundant numbers of chinook in Lake Michigan from Kenosha, to Washington Island, and into Green Bay. They especially like water that is 50-57 degrees Fahrenheit. Chinooks are native to the Pacific Coast from southern California to northern Alaska and on the Asian shore south to Japan.

This predatory fish is one of the most popular game fish in the Great Lakes region because of its large size, ability to put up a good fight, and the fact that it tastes delicious. Anglers aren't the only ones who like these fish. Sea lamprey attach themselves to these chinooks and feed off of them. Chinook young are also hunted by large carnivorous fish, birds, and mammals.

Chinook spend their life in the open lake in water less than 100 feet deep, preying on alewife and smelt. One of the best methods for catching this fish is by trolling with a plug or spoon, using a down rigger to get the lure down to where the fish are. Oftentimes a westerly wind causes cold, deeper water to move near the shores of Wisconsin. Chinook will follow the smaller fish, their prey, into the shallows and anglers using spoons or fishing with alewives can catch them. The best fishing is early morning or late evening starting in June and running through October. You'll find these fish from Kenosha, north to Gills Rock, and into Green Bay. In fall, salmon move upstream and can be caught on baits of spawn bags, yarn flies, and streamer files. Be aware - some harmful pollutants can build up in fish. Be sure to talk with an adult and follow all fish advisories issued by the Department of Natural Resources.

Chinooks, cohos and steelhead have become popular sport fish. Fish biologists at the Wisconsin Department of Natural Resources, continue to stock them because they don't successfully reproduce on their own in rivers that feed into Lake Michigan. Most waters in our state lack the clear, cold, well-oxygenated streams that chinook and their Pacific relatives, the coho and steelhead, need to reproduce. Eggs and milt, or sperm, are collected each year from September to November when the adult salmon attempt to spawn. The salmon die after spawning. The eggs are then taken to fish hatcheries where they hatch and grow into young fish and are eventually released into Lake Michigan. The fish grow in the lake until they mature at about 3 to 5 years-old. The chinook then return to the stream in which they were released and the process begins again.

You can watch fish and egg collecting as fisheries biologists and technicians with the Department of Natural Resources work at several collection facilities along Lake Michigan tributaries.