Arrival Date: 1936 they were discovered in Lake Michigan. 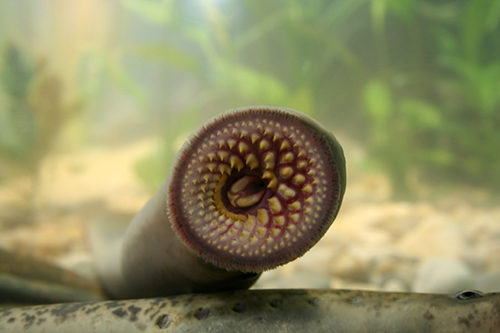 How to Identify: Sea lampreys are members of an ancient family of "jawless fishes" that were around before the time of the dinosaurs. They are 12-20 inches long and eel-like. They have dark brown to black backs and light yellow to pale brown bellies. Look for a feathery fin from their midsection down and under the tail. Their mouth is circular with circular rows of teeth. They have large reddish eyes.

Sea lampreys are parasites as adults and use their raspy disc-shaped mouth full of teeth to strike and hold fast to fish. They make holes in the sides of their victims and feed on blood and body fluids. They stay attached for hours, days, or even weeks. Large fish will most likely survive a lamprey attack with just a circular scar left on their side. Small fish may die immediately from the attack or will die from an infection from the large sucking wound.

Sea lampreys are limited to the Great Lakes and their tributary streams.

Disguise (don't be fooled by look-alikes): Freshwater lampreys are also found in Wisconsin's waters. Some are parasites and some are not. These lampreys live in balance with their natural food chain and don't deplete fish populations. Their are four species of native lampreys including:

Evidence: Lampreys attach themselves to other fish and suck on their blood and body fluids. They leave rounded scars on the fish. When they first arrived on the Great Lakes scene, they killed large numbers of predatory sport fish. People began to notice the lack of large fish and the scars on others. Lampreys preyed on whitefish, lake trout and chub populations in lakes Superior and Michigan. The lamprey invasion made it hard on the people who fished the Great Lakes to make a living.

One sea lamprey can upset an ecosystem and food chain by eating an estimated 40 pounds of fish or more in its lifetime. Multiply that times 22,000 lamprey found in just one river and you have a lot of dead fish. Because of lower large fish populations, small fish, like the alewife, were able to increase in numbers. Alewives are also invader species which compete with native fish for food and habitat.

Invaded Territory: the Great Lakes and clear, cold streams throughout the Great Lakes region. Construction and improvements on the Erie and Welland Canal (between Lake Ontario and Lake Erie) around 1921 allowed sea lampreys to get through the canal to the next lake. Here's a list of their arrival dates in each lake:

Sea lampreys will lay over 100,000 eggs when spawning, much more than the native lamprey species.

Extermination Techniques: Lampricides (poison) was first used in the late 1950s to kill larval lampreys. The chemical was not harmful to humans and didn't affect many plants, invertebrates, fish or waterfowl populations. The chemical worked, but it was costly and did kill some young fish. In 1958 biologists estimated that the Brule River in Wisconsin produced over 22,000 lampreys each year. The Great Lakes Fishery Commission said that this population made up 30-50 percent of all the lampreys captured on American tributaries. Something had to be done!

In 1986, DNR fish managers, technicians and engineers designed a new lamprey barrier which let fish migrate through to spawn, but captured the lamprey. On that first day, 2,000 lamprey were caught! The new barrier was expected to reduce the number of lamprey above the barrier to nearly zero. Today, biologists are still looking for ways to stop the spread of lampreys in lakes, streams, and rivers. The lamprey population is under control, but they are still a threat to aquatic ecosystems. Several million dollars are spent each year on these control methods. Native predatory fish, like the whitefish and lake trout, have been restocked by fisheries professionals to help maintain a healthy level of these species.