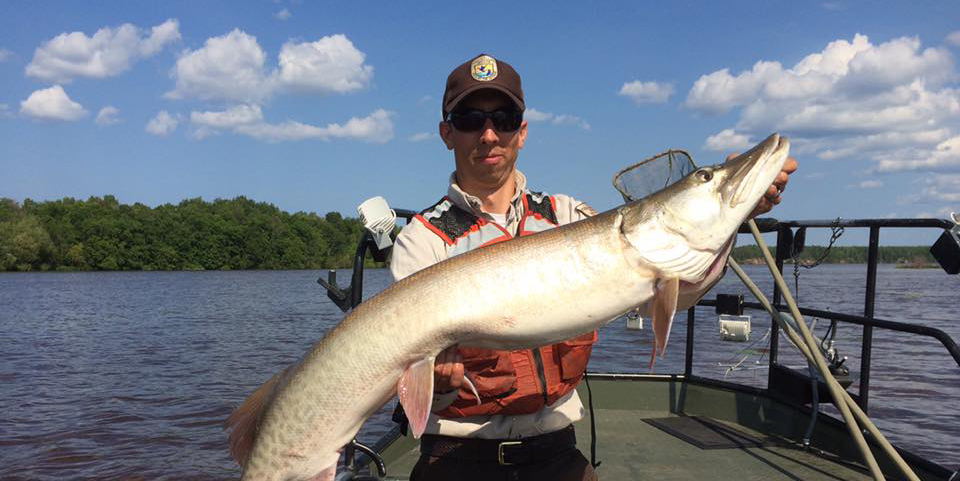 Meet the muskellunge -- a lean, mean fightin' machine that's the most sought-after trophy fish in Wisconsin; yet it still takes the average angler more than 50 hours to catch a legal muskellunge. Named the official state fish in 1955, this ferocious member of the pike family is often known in fish stories as "the one that got away."
musky photo

Muskellunge vary greatly in color and markings, depending on the clarity and color of their home waters. There are three sub-species, but all have dark vertical bars or spots on a light background. The back, head and upper sides of muskellunge range from an iridescent green-gold to light brown. Look for the cream-colored belly and long and deeply forked green to rust-colored back fins with spots.

Where They Live: The lakes and rivers of Wisconsin's north are home to the muskellunge. Muskellunge occur in 711 lakes and 83 river segments in Wisconsin. Look for muskies in lakes in the headwater regions of the Chippewa, Flambeau and Wisconsin rivers. Many lakes and streams have healthy muskellunge populations in central and southern Wisconsin where fry and fingerlings have been stocked.

Muskies hang out in lakes that have shallow and deep basins and large beds of aquatic plants like arrowhead, cattail, pickerel weed, and water lilies. They also like medium to large rivers with deep pools and slow-moving water. Fish for them near stumps, rocky ledges or in vegetation. They are most comfortable in cool water from 33-78 degrees Fahrenheit.

These fish are ferocious eaters and even eat other muskies! They'll strike, pierce the prey with their large canines, rotate the fish and swallow it head first. GULP! Look out muskrats, ducks, shrews, mice and frogs, you never know what they'll eat next.

Reproduction: Within the northern and southern limits of the Wisconsin muskellunge range, spawning occurs from mid-April to mid-May, with the peak occurring early in the season. The ideal spawning temperature is about 55º F. Eggs are usually deposited over several hundred yards of shoreline. Once deposited and fertilized the adults take off, leaving the eggs and young fish on their own. Adult spawners return to the same spawning ground year after year.

How to Catch the King

Why do some anglers only fish for muskellunge? Because having a muskellunge on the other end of the line is like having a tiger by the tail. The muskellunge will confound the angler with its aerial acrobatics, one moment leaping completely out of the water to shake the hook; the next lying still on the bottom like an unyielding snag. These famous fighters have been known to drag the line underneath the boat and wrap it around the nearest submerged tree stump. They will crack rods, strip reels, bend hooks, mutilate the bait and do whatever else they can to escape. Hooking a muskellunge is a first class fresh-water thrill no angler will ever forget.

The natural home for the muskie is in the northern lakes and rivers. It is a solitary fish and lurks in weed beds, shady shoreline waters with overhanging trees, or other protective cover. Anglers usually have the best luck fishing during the daytime. Large plugs, spoons, and bucktails that have "action" are the best artificial baits. A live fish bait 10-12 inches long is also good. Have a camera and a large landing net ready when you catch that big one!