Come spring and fall you may have the good fortune to see these large, white birds traveling through Wisconsin on their way to and from their nesting or wintering areas. Tundra swans were, until recently, called whistling swans because of the sound made by the powerful beating of their wings in flight.

What to look for

Tundra swans are big birds. They vary in size, but are usually between 3 and 4 feet long. Their wingspan is about 7 feet. They have a short, duck-like bill. It is black with a yellow spot at the base. The black of the bill extends up to the eye but doesn't go around it. They have black legs and feet. Their feathers are all white. It can be kind of tough to tell them apart from the endangered trumpeter swan, but there are differences.

Tundra swans breed and nest in the tundra and in sheltered marshes on the Alaskan and Canadian coast near the Arctic Circle. They pass through Wisconsin on their way north in early March through late May. They stop in small flocks to rest and feed, then continue on their journey to their nesting grounds. In the fall, migration begins again and they head south, travelling through Wisconsin in large flocks on their way to the east coast. They overwinter in flocks on shallow ponds, lakes and estuaries near the Chesapeake Bay and in the marshes of Virginia and North Carolina. 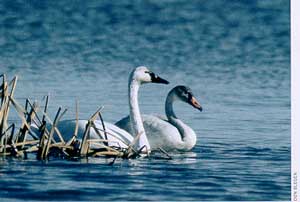 Once they arrive on their nesting grounds, they gather mosses, sticks, and grasses to build a large, raised nest. This mound of material can be three feet high. (Now, that's a nest!) This keeps the nest safely above water and lets the swan have a good view of any predators coming their way.

In Wisconsin, tundra swans eat mostly wild celery and arrowhead tubers. They use their long necks to reach roots which they knock loose from the bottom of shallow water with their large feet. On their wintering sites along the east coast, they will also eat small shellfish.

....the female swan is called a pen, the male a cob, and the young a cygnet.