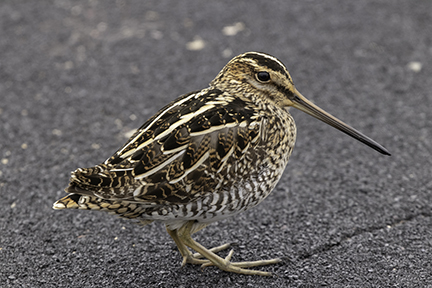 Coming This Spring to Wisconsin's Woods

It's twilight. You're walking in a field or forest opening when you hear a buzzing call or "peent" sound. A small animal up ahead is bobbing its head up and down and strutting around. Suddenly, it spirals upward to a height of more than 200 feet. In less than a minute, it spirals back down to earth, zig-zagging and swooping while making a musical, chirping sound. Once back on the ground, it starts "peenting" again. Say hello to spring and the return of the American woodcock. What you've just witnessed is the male woodcock performing a mating ritual.

The woodcock, also known as timberdoodle (don't ask me why), is a small bird weighing about 6-7 ounces. Its average length is 8-10 inches which includes the 2 ½ inch-long bill. What do you suppose this bill is good for? If you're thinking, "hmmm, I bet it's good at probing for earthworms," you're right. This bill is specially constructed to allow the bird to probe for earthworms--its favorite food. The tip is equipped with special cells so that the woodcock can probe easily into soft mud and pick up worms. Sometimes you can tell if a woodcock has visited an area by looking for probe holes close together on the ground. 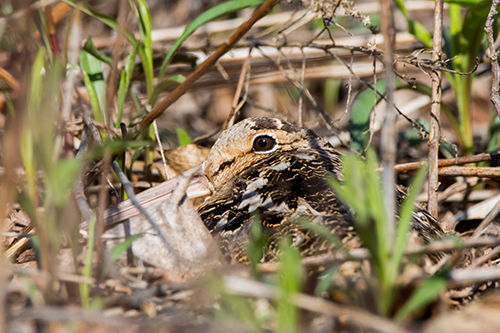 Besides its bill, the woodcock has several other unique features. The bird has a very short neck, and its head is almost upside down as compared to other animals. Its brain actually lies upside down in the bottom of the skull. The woodcock's large eyes are set extremely far back on the head so it can see while feeding face down. The ear holes are below and slightly in front of the eyes instead of behind the eyes as they are in most birds. The woodcock's body is supported by slender legs with long toes. When flushed, woodcock fly in a "zig-zag" pattern and during their sporadic flight, they emit a twittering whistle. This sound is produced by the bird's three outer wing feathers which are stiff and narrow. Truly, the woodcock is an unusual bird.

It is at its most unusual in the spring when the male performs the mating ritual described above. Woodcock breed in March and April throughout most of the eastern United States and Canada.

After mating, the female woodcock builds her nest, which is nothing more than a shallow depression in the forest floor, close to a male's "singing ground." Most nests are located beside a log or stump, under a small tree or within fallen brush.

The woodcock lays an average of four buff-colored eggs, flecked with small dark spots. She incubates her eggs for 20-21 days and, during this time, is extremely reluctant to abandon her nest. She almost has to be touched before she'll move. When she does leave, she often pretends to have a broken wing in an attempt to lure predators away from her nest.

When the young woodcock hatch they are fluffy and active. Within 2 days of hatching, the chicks may be more than 100 yards from the nest, foraging for earthworms. After 14 days they are able to fly and by 28 days old, they are strong fliers.

The woodcock's favorite food choice is earthworms, which make up 80 percent of its diet. In fact, the woodcock has been known to eat its weight or more in earthworms within 24 hours. Beetle, larvae, ants, and other invertebrates make up another 10 percent of the bird's diet. These foods are eaten mainly in times of drought, when earthworms are deeper in the earth so the woodcock can't reach them. Small seeds and berries of plants like violets, alder, blackberry, and sedges make up the remainder of the woodcock's diet. Woodcock like to feed in moist soil in forest openings, alder bottoms, and aspen alder stands. The birds feed mostly during the day.

Down on the Bayou

Wisconsin woodcock spend their winter in Arkansas, Louisiana, and southwest Mississippi in the flood plains and backwaters of the Mississippi River delta region. Beginning in late January or February woodcock travel north, spending about 4-6 weeks on their journey to the breeding grounds. Most have arrived back in Wisconsin by mid-March, but arrival times vary, depending on spring snow melt.

Woodcock are preyed upon (eaten) by a number of predators. Dogs, skunks, opossums, snakes, and crows often eat woodcock eggs and destroy nests. Cats will eat birds, but don't usually eat eggs. Young birds are often lost during periods of cold weather, drought, and flooding. Adult woodcock are eaten by owls, hawks, and red and gray foxes. They also die from diseases and parasites like tapeworms, roundworms, flukes, and lice.

The woodcock is a game bird, which means it is hunted. Woodcock season runs from late September until early November. Because of the declining population, the hunting season has been restricted with a shorter season and a lowered bag limit. (A bag limit is the number of birds you can take.) The result has been fewer birds harvested, but no change in the population. So, it doesn't appear that hunting is a factor in the birds' decline. A research project is now underway to look at the lead content in woodcock to see if that is affecting the population.

Wisconsin's wildlife biologists gather information about the woodcock by conducting annual spring surveys and through special research programs. The most practical way to manage for woodcock in Wisconsin's forests is through commercial logging operations. The pulpwood industry creates good woodcock habitat because of the large amounts of aspen that is maintained through clearcutting. As aspen forests mature, however, their value to the woodcock decreases. So, maintenance of young aspen stands, as well as dense stands of other species, like alder, is essential when managing for woodcock.

Keep your eyes open this spring for the amazing display of the male woodcock.