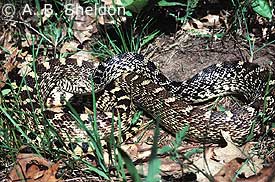 What's that hissing sound? Well, it could be a gophersnake. This harmless snake mimics a rattlesnake by shaking its tail in dry vegetation, and sometimes hissing loudly when someone gets near it. Unlike the timber rattlesnake, the gophersnake has a heavily patterned head and a pointed tail. The gophersnake's mottled and blotched pattern changes along the length of the snake, so that sometimes it looks like three different snakes connected together. Also, it has a very noticeable triangular head shape, which is a good way to identify it. It's the longest heavy-bodied snake in Wisconsin.

Gophersnakes live along the western part of the state in sand prairies, oak savannas and in pine and oak barrens. They feed primarily on small mammals and do a good job of controlling pocket gopher populations.