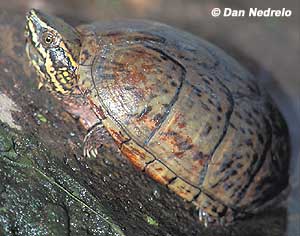 One of the world's smallest turtles, this critter is often known by its nickname, "stinkpot." Can you guess why? If your answer is, "because it stinks," you're right. The musk turtle gives off a foul, musky smell when it is grabbed.

How can you tell if you're looking at a musk turtle? Look for a brownish-black carapace (upper shell). The shell is kind of oblong and domed. Its plastron or underside is smaller than most turtles which gives this critter greater range of motion in its legs. It also leaves it more open to predators. The musk turtle has a sharply pointed snout with two thin whitish-yellow stripes running along either side of the snout to the neck. The stinkpot has small, poorly webbed feet and short legs.
This is a map map showing where musk turtles can be found--range is in brown.

It likes to live in areas with lots of aquatic vegetation, which it uses for climbing to the surface. You'll usually find this turtle in lakes and backwaters, but you can find it now and then in streams and rivers.

Eastern musk turtles spend much of their time walking on the bottom, foraging for snails, fingernail clams, and aquatic insects.

You won't find this turtle basking much. It usually only basks in the spring, when females may choose to raise their body temperature to speed up egg development.