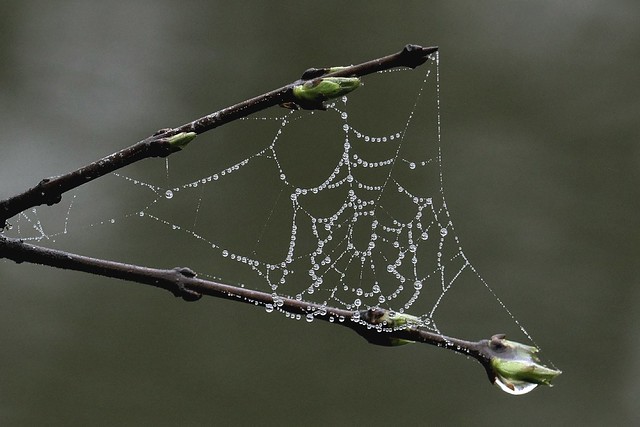 Are you afraid of spiders? There's a name for that fear—Arachnophobia. It's kind of a mystery why so many people fear spiders. Most spiders are harmless to people. The one pictured above is one of the few poisonous spiders in the United States, called a black widow. You can find these spiders in Wisconsin although they are shy and not often seen.

There are many, many different kinds of spiders. Think about all the different spiders you see. You find them in your homes, in your garden, hanging out on your house, just about everywhere. Spiders live in all kinds of habitats, from Australia to the northern coast of Greenland. They live in cold climates as well as desert climates. Some skim along the surface of the water and some even dive below the surface looking for food! Some spin webs to catch insects, while others wander about hunting for prey.

Spiders are not Insects

Spiders and insects both belong to a large group of related animals in the Phylum Arthropoda. Arthropods are among the most numerous creatures on the earth. All arthropods have a hard outer-body covering with joints in the legs so they can bend them. Arthropod actually means "joint-legged." The hard outer covering is really their skeleton—they wear it on the outside of their body. This "exoskeleton" protects the body. It's like wearing a suit of armor. When these animals are growing, they need to shed their exoskeleton from time to time. This leaves them very vulnerable to attack by other animals.

Some of the differences between insects and spiders are pretty easy to spot. Insects have three body parts—the head, thorax, and abdomen. Spiders have two parts-a combined head and thorax (the cephalothorax), and the abdomen. Insects have six legs, spiders have eight. These are the most obvious differences.

Most spiders have eight eyes and most do not see very well. They sense the vibrations of a moving insect using sensory hairs on their legs. Web-spinners pick up vibrations through the silk threads of the web.

Most spiders eat insects and most of the 105 spider families have venom glands. Once prey is caught, the spider injects venom and other digestive juices into it. The prey's insides turn to liquid, and are sucked up as a kind of "soup."

All spiders make silk even if they don't build webs. Spiders rely on their drag-lines, a strong double strand of silk that is let out as the spider moves. The dragline is glued down at different spots so that it is always anchored. That way a spider can quickly drop down the line if danger approaches. They also use this dragline to find their way back home.

Young spiders use silk to travel to new homes. After emerging from the egg sac (also made of silk), the spiderling walks up to the top of a grass stalk or leaf and releases a few silken lines which are then pulled out by the wind. Since the spiderling doesn't weigh much, these silken strands provide enough lift to carry it away. Spiders traveling on the wind are said to be ballooning.

About half of all known spider species spin webs. Spider webs help spiders out in many ways. The spider can tell if its got company, enemy or prey, by feeling the vibrations on the web. The web catches insects for the spider to eat. Once a spider has captured an insect in its web, it wraps it in silk, making it helpless. This way the insect can't get away and the spider, if necessary, can store its prey and eat it later.

There are over 1100 spider species in Wisconsin.

The common garden spider (Araneus diadematus) found throughout Wisconsin eats the remains of its old web at the end of the day, then spins a new one.

Spiders are often found at great altitudes on silken strands. Scientists sampling the air find many spiders drifting along about 200 feet above the ground and occasionally come across them as far up as 10,000 feet.

Since ancient times, spiders have had a reputation as relievers of fever. Until the 15th century, spiders were placed in nutshells or bags and hung around a person's neck in an effort to control a fever.

For More Information About Spiders, Check Out the Following Books

The Lives of Spiders by Dorothy Hinshaw Patent. 1980. Holiday House.