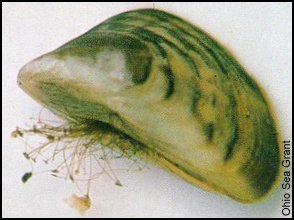 Arrival Date: They were first found in the Great Lakes on June 1, 1988. They were accidentally introduced to North America in ballast water from a boat that traveled across the ocean.

How to Identify: Polymorpha (part of this alien's scientific name), means "many forms." Zebra mussels come in many colors. Most are white or cream-colored with jagged brown or black stripes. However, some individual mussels have been found that are all-white, all-black, or have stripes going the other direction. Zebra mussels are members of the phylum Mollusca (mol-US-ka), or mollusks. Mollusca comes from the Latin word, mollis, meaning soft. Slugs, snails, octopuses, clams, and oysters are all mollusks. Mussels are bivalve mollusks. Bivalves have two shells that are held together by a strong ligament.

The fertilized eggs quickly develop into free-swimming larvae called veligers (VEL-i-jers). Veligers are smaller than periods! They feed on tiny phytoplankton and begin to grow shells. The water currents can cause veligers to travel great distances.

At 3 - 4 weeks, the veligers' shells weigh enough to cause them to sink. They must find something to attach to or they will die.

Some of the veligers attach to hard surfaces called substrates. Hard surfaces include rocks, wood, glass, metal, native mussels, and each other. They now change from free-swimming larvae to anchored mussels. Very few of the veligers survive to this stage.

The young zebra mussels reach sexual maturity during their first year and are ready to continue the cycle.

Evidence of Invasion: They're clogging things up! These tiny little mussels can get into the water intake systems of power plants and water treatment facilities and significantly reduce the flow of water. They also can clog up the cooling systems of boat engines. This clogging costs millions of dollars to unclog!

Zebra mussels also pile up on beaches. When they die they wash up on the shore and begin to decay. Their shells are razor sharp. Watch your step!

When zebra mussels feed on plankton, they remove incredible amounts of food from the water. They can filter about 1 quart of water each day. They leave the water clear, sometimes too clear. The zebras grow on top of the native mussels and smother them. With plankton removed from the water, more sunshine reaches the bottom. Plants living here grow rapidly. They also use zebra mussel droppings as fertilizer. Bottom-feeding fish feast on the waste produced by the zebra mussels. Their numbers increase. Zooplankton and small fish which feed on plankton have less to eat. Their numbers decrease. Larger fish which feed on the small fish decrease in number. The zebra mussels take food, space, and oxygen, causing the death of native mussels.

Zebra mussels are also just plain tough. Veligers can survive for a month in water with little or no food. Adults can survive a week or more out of water. They reproduce so rapidly that they outcompete other animals. With few natural predators, scientists are concerned about when and where the invasion will end.

1. Are you providing free rides to aliens? Don't be an alien helper, watch out for hitchhikers. Zebra mussels have already invaded the Great Lakes and the Mississippi River. Other lakes and streams in Wisconsin are at risk. Check the ways you think zebra mussels can get from one body of water to another.

If you find a zebra mussel, take a close look at it. While we are not crazy about having them in Wisconsin, they are fascinating animals. Do not put the mussel back into the water. Try to determine if anyone has seen zebra mussels in this particular body of water before.

Note: If you checked all the boxes above, you know how to avoid giving free rides to zebras!

2. Freshwater drums (fish) and diving ducks eat zebra mussels, but they don't eat enough to control their population. Zebra mussels seem to be able to survive everywhere, but they are rarely found in still water or fast-moving water. They also don't do well in polluted water or at low oxygen levels. Summer water temperatures might also limit their spread.

3. Chemicals will also kill the other animals living in the lakes. Scientists are searching for ways to control their growth. Meanwhile, some diving ducks are changing their migration patterns to munch on zebra mussels.

This "WILD in the City" publication was developed by the Wisconsin Department of Natural Resources and Project WILD with a grant from Phillips Petroleum Foundation and the National Fish and Wildlife Foundation. Written and designed by Beth Mittermaier, 1996.