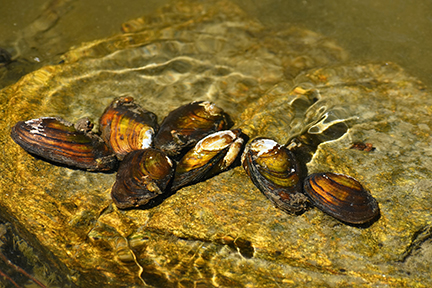 How would you like to have a shell, no eyes and catch your food with your nose? No? Well, that s what a mussel does. Freshwater mussels have a hard and strong shell that helps protect them from predators such as birds, raccoons, and turtles. Between its shell halves is a "tongue- shaped" foot used to pull it along the bottom of rivers and lakes. It breathes through gills. A mussel depends on the river to bring it tiny microscopic plants and animals, which it filters out of the water. Poisons in the water are also filtered out and stored in the clam's body. Some mussels can be a tasty treat for people, although tough and chewy. Would you eat any from areas where waste and chemicals from farms or towns wash into the water? Interestingly, the first buttons were cut from mussel shells. One of the first important fishing industries in Wisconsin was mussel fishing to make mother-of-pearl buttons. The mussel trade is still important in Wisconsin. Small pieces of freshwater mussel shells are sent overseas where they are inserted into oysters as the 'seeds' that will become cultured pearls.