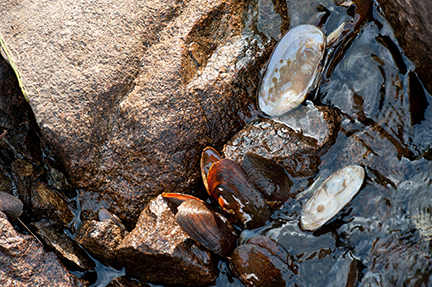 Winged mapleleaf, rock-pocketbook, monkeyface—sound like nicknames for friends of yours or perhaps, World Wrestling Federation wrestlers? They're actually names of mussels found in Wisconsin. That's mussel as in aquatic animal, not the muscles you use to play soccer.

You don't have to go to Florida to find shells. Wisconsin has its share of clams (more than 30 species) and mussels (40-50 species), which are part of a larger group of aquatic animals known as "bivalves." This means that they have two external shells. The difference between the two is that mussels must have a host species, like a fish, to complete their life cycle, clams do not.

Mussel reproduction is a pretty amazing thing. It starts with the male mussel expelling sperm into the water. If the water currents are right, the male sex cells are taken in through what is called the incurrent siphon. They end up in the female's respiratory gills as water moves over the gill surface. These gills do double duty during the breeding season. They hold the eggs and act as brood pouches--a place where the fertilized eggs develop into embryo mussels called glochidia (glo-kid-e-ah). The female mussel expels these mini-mussels into the water when the glochidia are mature. This is often due to the action of a fish "triggering" her to release her young as it gets into range. If the fish reads its cue right, it swallows the blast of embryo mussels. Once swallowed, the glochidia "sting" the fish as they clamp onto whatever they can. Feeling this, the fish knows it hasn't swallowed something good to eat. So what does it do? It regurgitates, which forces the mussels through, backflushing past the gill tissues. The glochidia wind up on the fish's gills and attach themselves there. At this point, the glochidia are parasitic, although it doesn't seem to harm the fish. Within a week to a month, most young mussels are ready to drop off and live on their own, although there are some that overwinter on the fish's gills and drop off the next spring. Whew! What a journey.

Research has shown that some mussel species have only one kind of fish as a host for their glochidia, while others have many. One freshwater mussel even has a salamander as its host. For one species to be totally dependent on another species for survival is kind of risky. If the host animal (fish or salamander) population gets in trouble, what do you suppose happens to the species that depends on it? Yep, it's soon in trouble too. But, it's pretty amazing to think how closely the mussel and host species must have evolved.

Wisconsin's mussels have never been considered a gourmet delight, but they do have a history of economic value. Native Americans used mussel shells for jewelry and for tools like spoons, spades, and single-edged razors. Before plastic buttons came on the scene, buttons were made from mussel shells. As a matter of fact, in 1887, German immigrant J.F. Boepple fathered what became a multi-million dollar pearl button industry on the upper Mississippi River. The last shell button plants closed in the 1960s.

Today, there are still some commercial "shellers." They gather mussels to sell to the pearl industry where ground mussel shells are used to seed oysters, producing cultured pearls. Commercial mussel fishermen sail currents rather than breezes, using underwater canvas sails called "mules" in wooden, flat-bottomed "johnboats." A 20-foot bar armed with chains and three-pronged hooks is dragged down current over the mussel beds. When disturbed by this bar, the mussel's response is to clamp onto it. When the bar is full, it is hauled up. The mussels are then removed, sorted, and bagged. Shellers are allowed to keep only certain species of mussels. Others must be returned to the water. Unfortunately, mussels thrown back in often don't survive unless they are put back in the same area. Because of this and the fact that there are so many mussels that are not legal to harvest, almost all mussel fishing is now being done by scuba divers specially trained to collect only certain species and sizes of mussels. Almost all the harvesting in the United States is in the southeast and is done by divers.

Mussels face a variety of changes to their habitat. Dams turn flowing water into standing water and mussels are flowing water animals. They need moving water to provide incoming food and oxygen and for eliminating waste. Dams also lead to the deposition of soft sediments like silt and mud. Mussels are firm river/lake bottom creatures. They like gravel and cobble. Mussels also tend to store pesticides and heavy metals like zinc and mercury. This makes them natural records of some of the pollutants in our waterways. Mussels are also vulnerable to dredging and boats, which can stir up silt, burying mussel beds. The zebra mussel (an exotic species) is also a threat to some of our native mussels. Zebra mussels can reproduce very quickly, taking over valuable habitat and pushing out some of our native species.

There are 18 species of mussels in Wisconsin that are threatened or endangered. We know very little about some of them. They have interesting names like purple wartyback, spectaclecase, snuffbox, ebonyshell, and monkeyface. Wisconsin mussels may not be as colorful as some of their Florida counterparts, but they still play an important part in our aquatic ecosystems. They help stabilize river bottoms, serve as natural water filters helping keep our waterways clean, provide excellent spawning habitat for fish, and serve as food for fish, birds, and some mammals. Watch this mussel slide show to see photos of mussels and people working to protect them.

Some of Wisconsin's Mussels 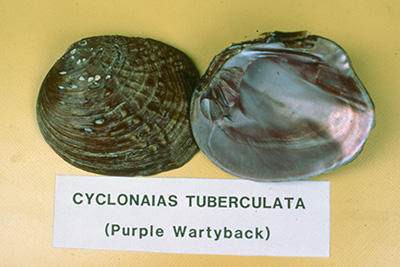 The purple wartyback has a brown or black, heavy shell. 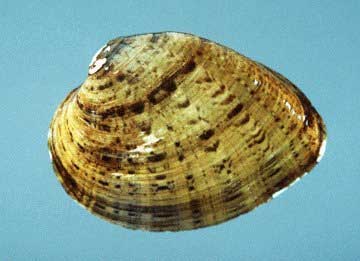 The butterfly mussel has a yellow or brown shell with interrupted greenish rays made up of V-shaped marks. 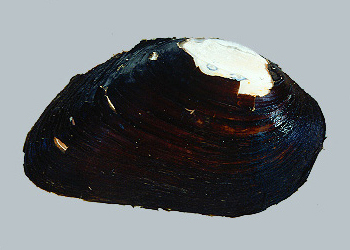 The elephant-ear mussel has a heavy, brown or black shell. 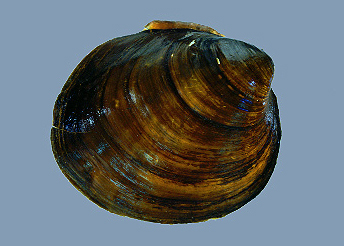 The ebonyshell mussel has a brown or black, very heavy shell. 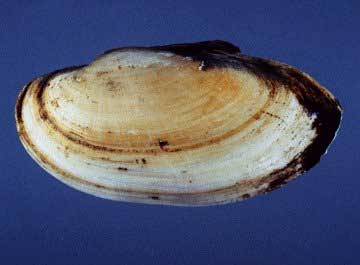 The yellow/slough sandshell mussel has a long, inflated yellow shell. Greenish bars may be visible. 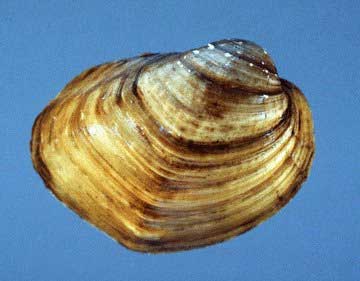 The bullhead mussel has a heavy, brown shell with several radial (running down the center) knobs. 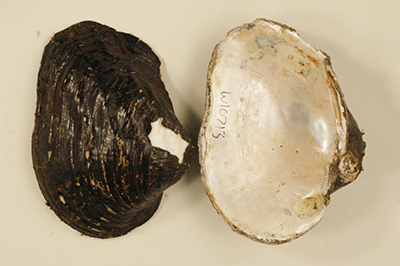 The rock-pocketbook mussel has a brown or black, large shell. The juveniles are greenish. 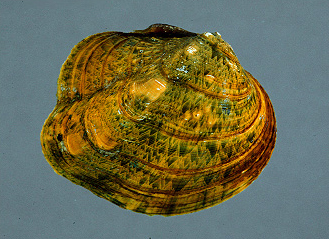 The monkeyface mussel has a brown shell, usually with zig-zag green lines, especially on young mussels. 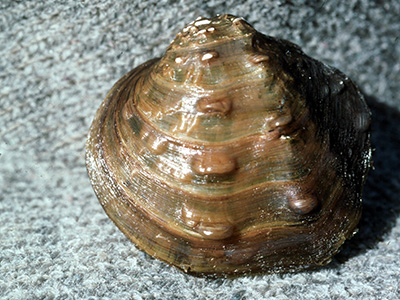 The winged mapleleaf mussel shell is heavily textured. Juvenile shells are tan to greenish in color, while adults vary from a dark, yellowish to seal-brown. 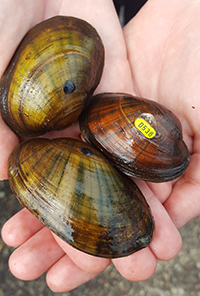 The Higgins' eye's 3" to 4" roundish shells, or valves, are golden-olive brown with dark rings and green and orangish rays. The inside of the shell is coated with white or pink mother-of-pearl, also called nacre.

Now that you know more about mussels, take a hike. Here are some good places to go shelling in Wisconsin. But remember, don't collect live shells.