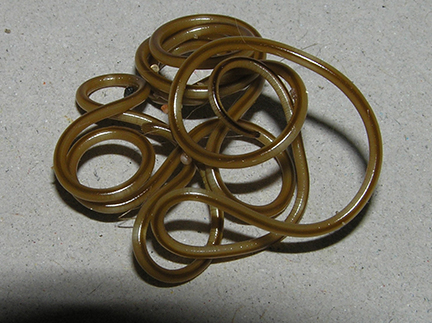 This unsegmented worm looks just like a horsehair. The larvae live inside of other aquatic critters like leeches, beetles, grasshoppers, crickets, and other insects for several months to feed, then the insect dies. This critter is called a "parasite." The adult worm then goes into the water on their own in late summer or fall and scientists don't know if it eats because no mouth parts can be found. The worms measure from 1-3 mm diameter and as long as 1 meter! They can also be found some times in damp areas like gardens after a rain, but don't worry, they don't infect large animals or people.