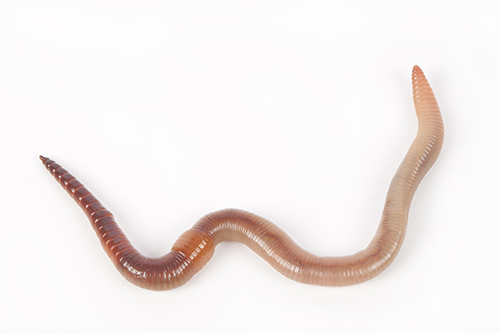 Want to watch an earth-moving, dirt munching, soil making machine? You can watch one live, and in the comfort of your own home. This machine has no gears or wheels. In fact, it's not a machine at all -- it's an earthworm.

"All fertile areas of the planet have at least once passed through the bodies of earthworms."

Earthworms eat their way through the soil, getting food from small pieces of decaying plants and animals. By doing this, they make the soil a better place for plants to grow. Their tunnels let air into the ground and keep the soil loose. The soil they can't digest is excreted with mucus to form the tunnel walls or is left in the form of castings on the surface. In doing their job, worms become important recyclers.

Earthworms are simple animals. Inside, they have two tubes, one inside the other. The inner tube is the digestive system which you can see from the outside as a dark line inside the worm. The black color is actually the food in the digestive tract. You'll also notice that worms are segmented where each segment is the same except for the head and a larger band called the clitellum. The head is the end which moves forward and has a mouth but no eyes since worms are always underground in the darkness. The clitellum (or band) that you see contains many glands which secrete mucus to make the walls of a cocoon in which fertilized eggs are deposited. The cocoon is then left to hatch in the soil. Earthworms have both male and female reproductive organs and can produce eggs as well as fertilize them.

Of course earthworms don't need legs, they wriggle by moving their front-half forward, anchor it with small hair-like structures called setae, then they pull their back half forward. Earthworms dig tunnels by eating up the soil in front of them. The soil is then excreted with mucus to form burrow walls. Castings, which are excreted wastes and dirt clumps, show up on the surface of the ground. They look like tiny bunches of grapes. You've probably seen them in wet moist places. If not, go out and try to find a bunch. Castings help fertilize the ground.

That's worms in a nutshell, rather, in the ground. Here's how you can watch them make better soil right in front of your eyes.