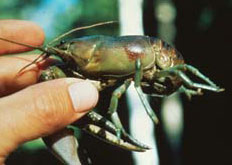 Most alien invaders come from another country, but not this one. The rusty comes from streams in the Ohio River Basin states of Ohio, Kentucky, Illinois, Indiana, and Tennessee. Today, rusty crayfish are also found in Wisconsin and surrounding states, the North Eastern states, New Mexico and many areas in Ontario, Canada.

Populations have expanded since 1960 throughout northern Wisconsin lakes and streams. Rusty crayfish were probably accidentally introduced into Wisconsin's waters by anglers who used them as live bait, or by kids and teachers who let them go after studying them in school. Be careful not to release this crayfish!

This crayfish measures two and one-half inches (not including claws) in length. Look for their large claws with black bands on the tips and dark, rusty spots on each side of their carapace (hard outer body covering). Their claws are grayish-green to reddish-brown and smoother than most other crayfish. The rusty spots may not always be present or well developed on rusty crayfish from some waters.

In some northern Wisconsin lakes it has eaten most of the aquatic plants, hurting the quality of the lakes. Fish that normally eat crayfish don't like the feisty, aggressive "rusty." It takes over the homes of native crayfish and has been known to eat fish eggs. Rusty crayfish reproduce quickly and females lay from 80-575 eggs!

People have stopped swimming in some areas where rusty crayfish have taken over because they have been known to pinch people's toes - ouch!

Rusty crayfish live in lakes, ponds, and streams. They like areas with rocks, logs, or other debris as cover.

This crayfish eats twice as much as other crayfish, gobbling down small fish, invertebrates (aquatic worms, snails, leeches, clams, mayflies, stoneflies, midges, and crustaceans like side-swimmers and waterfleas), and fish eggs. They also eat aquatic plants by using their claws to uproot them. Aquatic plants provide important habitat for fish and other aquatic animals, as well as prevent erosion. By damaging underwater habitat, fish also lose their spawning areas, protective cover, and food.

The best thing we can do now that they're here is to prevent their spread - so tell a friend, parent or teacher! Here's how everyone can help -