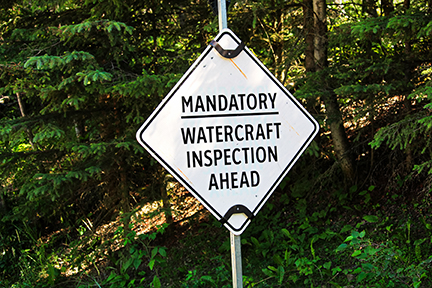 Homeland & Arrival Date: Quagga mussels are native to the Caspian Sea drainage area in Eurasia. They most likely arrived as stowaways in the ballast water of ocean going ships. They were discovered in the Great Lakes region in September 1989, when one was spotted near Port Colborne, Lake Erie. They weren't identified as a distinct species until 1991. 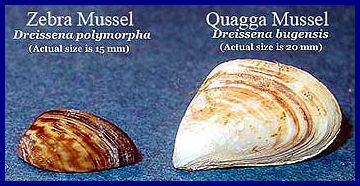 Life History: Quaggas like silty or sandy lake bottoms. They can live in waters ranging from warm and shallow to deep and cold. They are also able to tolerate somewhat salty water.

A quagga mussel feeds all year, even in winter when its cousin the zebra mussel is dormant.

So far, in Wisconsin, the quagga has been found only in Lake Michigan waters - not in any inland lakes. But because they prefer silt- and sand-bottomed lakes, quagga mussels may be able to successfully invade inland lakes, including some lakes that are not good habitat for zebra mussels. Quagga mussels have also found their way out west. They were recently discovered in Arizona.

Impact: Because they are extreme water/food filters, they eat up the food source of fish and can change the food web in a lake. They also take in lots of pollutants (at levels higher than the surrounding area), which can harm wildlife that eat them.

Some researchers believe that Lake Erie's dead zone may be that way because of their non-stop feeding, ability to live in deep water (up to 130m in the Great Lakes), and the excretion of phosphorous with their waste.

The quagga mussels, like zebra mussels, also clog water intake pipes and underwater screens. This plugs up pumps at power and water treatment plants which is frustrating and costs money to fix! Also, they build up in places where we go for summer fun - on boat docks, breakwalls, buoys, boats and beaches. Ouch - keep your sandals on!

How to stop the spread: Quagga mussels and zebra mussels spread in the same ways. The microscopic larvae can be carried in live wells or bilge water on boats, and in bait buckets. They are sneaky and attach themselves to boat hulls and trailers. Quagga mussels stick to vegetation, so be sure to remove all plants from the boat and trailer as well.

If you have a boat, ask your parents to do the following:

Learn about native mussels of Wisconsin.