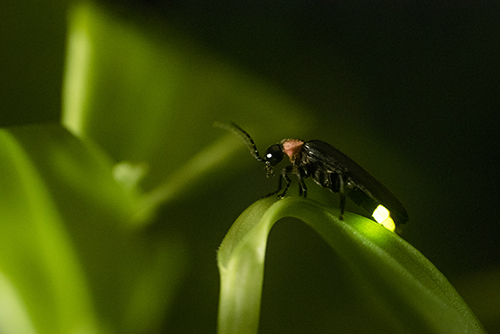 A story about fireflies.

Lightning bugs....Have you ever wondered about the small, blinking creatures that light up summer nights? Lightning bugs, also called fireflies, are not simply bugs and are not flies. They are beetles and part of a scientific family that contains the largest order of living things—290,000 species at last count. In fact, there are about 136 different species of fireflies illuminating earth's summer nights.

Fireflies are easy to locate. Go outside at different times during the evening and watch for small twinkling lights in the air. Good places to find fireflies are over meadows or lawns and at the edge of woods or streams. Fireflies are carnivorous. They eat other insects, small animals in the soil, and snails. Fireflies overwinter as larvae buried in the soil and emerge in the spring to feed. In summer, they pupate for about 2½ weeks within a small earthen cell before emerging as adults. The adult fireflies signal each other with their lights and mate. The female's eggs are laid a few days after mating, on or slightly under soil. The eggs hatch in 4 weeks. The larvae, once hatched, begin to feed until fall. They burrow underground and overwinter.

The summer evening light shows that you see are performed by male fireflies. They flash patterns of light to females. The females signal in response from perches in or near the ground. When the male sees the female's flash he continues to signal and moves closer. Eventually, through a series of flashes, they find each other and mate. Each species of firefly sends different mating signals. In fact, a beetle specialist or a keen observer can recognize most species by the number, duration, and time lapses between flashes.

The male firefly of the species Photinus pyralis, beams a single half-flash during a forward rising flight movement. It looks like the letter "J." The female responds with a single flash. Another species, Photinus consumilis, signals his mate with a rapid succession of flashes. She responds with two beams. In general, males will not fly down to a female that sends the wrong species signal. But, some females of differing species have evolved the ability to mimic the response flashes of species other than their own. As the male flies down to a mimicking female, he is captured and eaten, gulp!

The light given off by fireflies during their abdominal flashes is called bioluminescence. It happens when oxygen and the organic compound luciferin react together in the presence of the enzyme, lucifereace. This creates light. Although other insects can produce light, fireflies are the only insects that can flash their light on and off in distinct signals. Even the eggs and larvae of some firefly species glow. That's where the name "glow worm" comes from.

Fun on a Mid-summer's Night

Here's a way for you to learn about your local fireflies.

1. Gently catch and observe lightning bugs in a jar. Make sure that air is provided for the fireflies. Get an adult to help you punch air holes in your container.

2. Observe the flashing in the jar. Count the number of flashes, how long they last, and the time between flashes. Do this for 5 minutes. Record your data.

3. Return to your capture site and gently release your insects. Wait 1 hour and return to your site. Recapture fireflies and repeat your observations. If you notice a different flashing sequence, you probably have a different species.

If you'd like to learn more about fireflies, check out the following books.