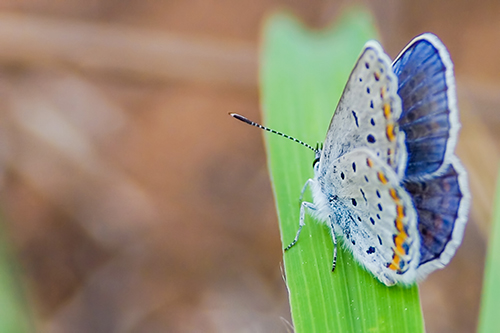 Wisconsin Status: Species of concern but not listed

Beauty and grace best describe this federally endangered species found in Wisconsin. This fragile blue butterfly only measures about one inch across its wingspan. You may be surprised to learn that the male and female are different in coloration and pattern (see photos above). The topside of the male's wings are silvery or dark blue with narrow black margins. The female's are grayish brown, especially on the outer portions of the wings, to blue on the topside, with irregular bands of orange crescents inside the narrow black border. The underside of both butterflies' wings are the same pale gray with a continuous band of orange crescents inside iridescent blue spots along the edges of both wings.

Living on the Lupine 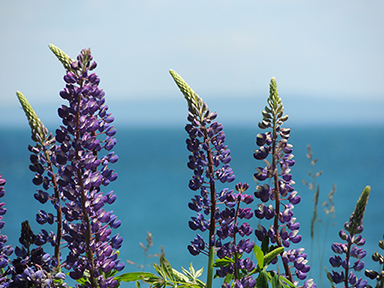 The Karner blue's lifecycle depends completely on one plant, the wild lupine. There are two generations, (that means two hatches), of Karner blue butterfly eggs each year. In April, the first group of caterpillars hatch from last year's eggs and the caterpillars feed only on the leaves of the lupine. In mid-May, the caterpillars pupate and adult butterflies emerge out of their cocoon-like chrysalis around late May or early June. The adults will feed on the nectar of flowering plants, mate and lay their eggs on or near the wild lupine plants. The eggs will hatch in about a week to feed on the lupine leaves for the next three weeks. The cycle then begins all over again when new adults take flight in July with the help of the wild lupine plants. This means that the Karner blue butterfly is severely restricted as to where it can live and survive. (See lifecycle slides.) Most butterflies, especially the females, stay near their home lupine patches during their short lives, only 5-7 days! Males may travel over a mile to find a new territory.

Karner blue's habitat can be found in Wisconsin's sandy oak savanna and pine barren areas (see photo below). Many of these areas are threatened by development, agriculture, roadside management, and woody succession (change of the land to shrubby woodland). Wisconsin still has the most widespread populations along with: Indiana, Michigan, Minnesota, New Hampshire and New York. But Karner blue population numbers have dropped in the United States mostly because the areas where wild lupine grows have been developed or divided up for roads, buildings, towns, and cities.

This habitat has also lost the natural disturbance, such as wildfire and grazing animals, needed to keep this area a prairie habitat. Fire helps keep the prairie from changing or "succeeding" into a forest habitat and keeps the lupine population healthy. This is a natural and important tool for managing the land, although, fire can be lethal to the Karner blue's eggs and caterpillars living on the lupine and plant litter. Even though this method sounds dangerous for the butterfly, fire and other practices such as timber harvest, planting, and herbicide treatment in the right doses can help provide new areas for butterflies to colonize. One other threat to the butterfly population is unethical butterfly collectors who think the rare and beautiful Karner blue would be a great addition to their collection. What they don't know is that even the loss of a few individuals could harm the butterfly population. Also, people who own land in the habitat range of the Karner blue may not know that they're there and could unknowingly harm Karner blue habitat or their populations. To battle all of these problems, the Wisconsin DNR is developing a statewide habitat conservation plan (HCP) and environmental impact statement to help protect the Karner blue butterfly. It will take time as biologists complete this very large study and finish their report examining the habitat, range, lifecycle, history, as well as state and public management efforts to help this butterfly in Wisconsin.

Wisconsin is fortunate because our landscape supports the largest and most widespread Karner blue populations worldwide. You'll find healthy populations in the far northwestern parts of the state, but they live mostly in central Wisconsin. To see what counties they can be seen in, take a look at the Wisconsin map.

Where can you see the Karner blue in Wisconsin? Look for the butterflies near patches of wild lupine in late May and early June. Later in the summer, wild lupine becomes difficult to see and the butterflies are easier to see drinking nectar on flowers such as butterfly weed, sunflowers, goldenrods, and other late summer blossoms.

Learn the techniques of butterfly watching, then go to places where you can see the Karner blues:

Help count butterflies of all types. Go to the North American Butterfly Association's clickable map to find the nearest butterfly count location to you, then click on it to find out who the contact person is in Wisconsin:
http://www.naba.org

Learn more about the Karner blue and other butterflies in Wisconsin (Leaves EEK!): http://www.butterfliesandmoths.org