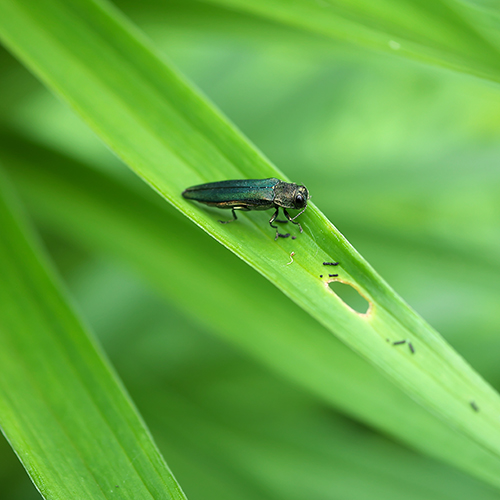 Homeland / Origin: This alien invader is from northern China and Korea. It can also be found in eastern Russia, Japan, and Mongolia. It isn't a major pest of ash trees in its native range, but it sure is trouble in the United States.

Arrival date: Before 2002, the emerald ash borer (EAB) was never found outside of Asia. But, in 2002, it was identified in southeast Michigan. Researchers think it arrived in Detroit several years earlier, probably as a stow-away in wooden packing materials aboard a ship.

Where has it spread? The original infestation in the Detroit area has grown since 2002, largely because of people moving infested firewood. On its own, the EAB only flies about 1/2 a mile in a year. But tucked away in a piece of ash firewood, it can move hundreds of miles in a single day in the trunk or truck bed of an unsuspecting camper. The EAB has now hitchhiked its way to Wisconsin and all of our neighboring states. It has also been found in Ontario and Quebec, Canada.

What's the big deal? All North American ash species are at risk of EAB infestation. Usually more than one insect infests a tree. Once these invaders get into a tree, the tree always dies. There are some ash trees that are not at risk, such as the mountain ash, but that's because they are not true ash trees. In Wisconsin, there are approximately 700 million ash trees in our forests, and about as many in our towns and cities. It's the second most common tree in urban areas, after the Norway maple. So, you can imagine what these insects could do to Wisconsin's forests and tree-lined streets!

How do they kill ash trees? The EAB, like many insects, has four distinct life stages: adult, egg, larva, pupa. EAB larvae live underneath the bark of ash trees, feeding on the layer of the tree's trunk that lies just below. When they do this, they cut off the flow of water and nutrients in the tree. Most trees die after about 3 years of infestation. The top of the tree begins to die first.

Identifying an ash tree: All ash trees have compound leaves, made up of 5 to 11 leaflets with a toothed or jagged edge. Another characteristic of ash trees is that their leaves are formed opposite from each other along a branch. You can look at the leaves on EEK's Tree Identification Key.

How to tell if an ash tree is infested with EAB: Sometimes ash trees produce epicormic (there's a new word for you!) sprouts or "water sprouts" on the trunk or on large branches where EAB damage is heavy. Epicormic sprouts are shoots coming from old wood. The bark of the tree may crack over the larval galleries - the places where the larvae are burrowing. Adult beetles leave a characteristic exit hole that looks like a capital "D," roughly 1/8 inch in diameter, when they emerge in June. Woodpeckers often attack larvae, especially during the winter, flaking off the bark in small strips as well as making holes. Woodpecker damage is larger and easier to see than the D-shaped exit holes. Several infestations have been discovered because people noticed woodpecker damage on ash trees and then took a closer look. Another common symptom of EAB infestation is yellowing or dying branches at the top of the tree. Because there are many different kinds of pests and diseases that can produce similar symptoms in ash, it's important to identify at least three of these symptoms before alerting experts. 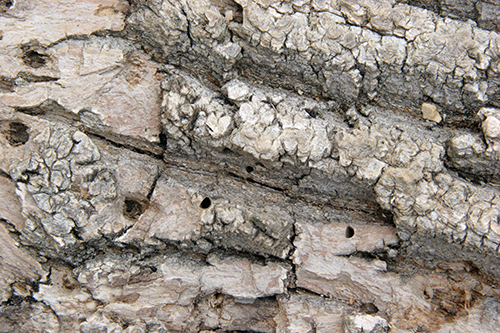 What does the emerald ash borer look like? The adult beetle is dark metallic green, ½ inch-long and 1/8 inch wide. An EAB can easily fit on top of a US penny, with room to spare! When adults flare their wings, you can see their violet abdomen. Larvae feed in the inner bark between the wood and the rough outer bark. They are flat, cream-colored grubs with wide heads-ugh.

What is the life cycle of EAB? Adult beetles begin emerging from an infested tree in May, with peak emergence in June. You'll find most of the beetles in late June and early to mid-July. Females usually begin laying eggs about 2 weeks after they leave the tree. Eggs hatch in 1-2 weeks, and the tiny larvae bore through the bark and into the cambium and phloem. This is the area between the bark and wood, where nutrients are transported within the tree. The larvae feed under the bark for several weeks, usually from late July through October. The larvae typically pass through four stages, eventually reaching a size of roughly 1 to 1 1/4 inches long. Most EAB larvae spend the winter in a small chamber in the outer bark or in the outer 1/2 inch of wood. Pupation occurs in spring and the new generation of adults will emerge in May or June, to begin the cycle again.

What is being done about this alien invader? There is a national effort to limit the spread and impact of EAB. A national plan, coordinated by the United States Department of Agriculture, Animal Plant Health Inspection Service (APHIS), guides what federal, state and local officials must do to manage this insect. Infested areas are quarantined, which means that things like ash firewood, nursery trees, and ash logs may not be moved out of areas where there are EAB.

In Wisconsin, the Department of Agriculture, Trade and Consumer Protection (DATCP) is currently leading efforts to watch for the EAB and respond to these alien invaders. The Department of Natural Resources (DNR), U.S. Forest Service, DATCP and the University of Wisconsin are conducting surveys and setting traps near where EAB has been found and in areas that are at high risk for introduction of the emerald ash borer. These include camping areas and locations where ash trees may have been planted within the last 10 years. Public information and education efforts are focusing on reporting possible sightings of EAB and restricting the movement of firewood.

What can you do to stop this invader?

Would you like to build an emerald ash borer beetle? Check out these Build a Beetle instructions.