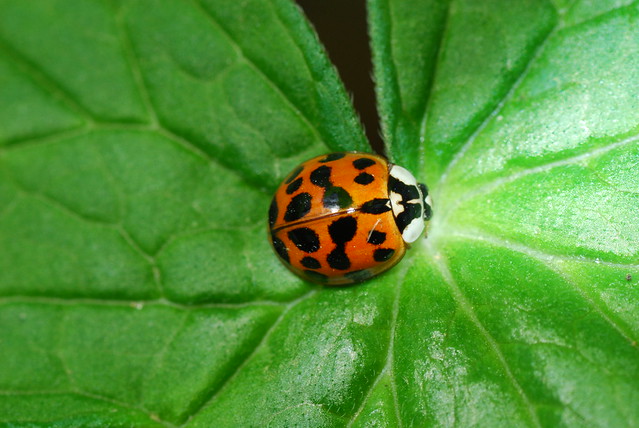 Arrival Date: This lady beetle came from Asia and was introduced to the U.S. in 1916 to control insect pests. Populations were slow to grow in the United States until 1988 when a large population was noticed in New Orleans. Since then the number of Asian lady beetles has continued to grow. Asian lady beetles have been in Wisconsin since 1994.

Multicolored Asian lady beetles can be beneficial insects. They do a great job of controlling aphids that can damage many types of plants - this is called "biocontrol" - and they reduce the need for harmful pesticides. Despite this benefit, people are bothered by the beetles swarming outside their homes or flying around inside the house!

How to Identify: The multicolored Asian lady beetles look like common "ladybugs," but they have many shades of color and generally more spots than native lady beetle species. Sometimes they don't have spots at all. Look for the big false "eyes"—two white football-shaped spots behind the head. Also look for their mustard yellow or red coloration.

Metamorphosis: Lady beetles go through four stages of life over an average of 20 days. They start as eggs, change to a larva, pupa and an adult with wings. Eggs are laid on host plants where the larvae can feed on aphids and other arthropods. Beetles are known to eat about 300 aphids before they are adults! Multicolored Asian lady beetles like many plants such as: evergreens, apple and maple trees, alfalfa, wheat, cotton, tobacco, and small grains. Larvae molt four times before becoming a pupa. These beetles can produce up to five generations in areas with extended periods of warm weather. Adult beetles can live as long as 2 to 3 years.

Evidence of Invasion: In the fall, adult beetles will look for shelter - warm place to spend the winter. They cluster in large groups in autumn on sunny southwest sides of light-colored rock outcroppings, at the base of logs, tree trunks, or the walls of buildings - like your house! There can be many of them, but they won't damage the structure of your house - they don't do much indoors. They might fly around the lights though or crawl around on warm days. They can overwinter inside and appear again in the spring.

Be careful if you disturb or squash these alien beetles, they can "reflex bleed" where a yellow fluid and unpleasant odor is released from their legs—this is designed to keep predators away. It can stain walls and fabric! These lady beetles can give a pinch-like bite - ouch! But, they are not harmful to people.

Prevention: The multicolored Asian lady beetle population boom will continue and our native lady beetles will need to adapt.

The best defense for us is to seal any cracks in windows, doors, or other places they might enter the house. Sweeping and vacuuming are recommended to remove and release unwanted beetles from indoors.