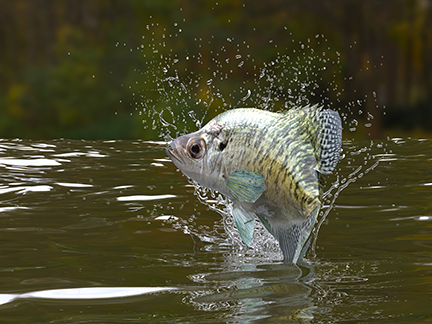 This black-spotted fish has more spots than its white crappie relative. The spots are in a blotchy pattern on the back and sides. Look for an olive-colored back, a greenish-yellow belly, and 7-8 dorsal spines.

Black crappies live in lakes and river backwaters across the state, except in the streams of the driftless area of southwestern Wisconsin. You'll find them living in open waters.

This fish has spots, but they are paler than the black crappie and are arranged in narrow bands running down the sides of the fish. Look for an olive-colored back and blue, green, and black spots on their silvery sides, and 6 dorsal spines.

Unlike the "papermouth," the white crappie likes slow-moving river channels in open water that is warm and more silty (particles suspended in the water). They can be found in southern Wisconsin in the same water bodies as the black crappie.

Crappies are part of the sunfish family, which also includes bluegill, pumpkinseed, largemouth and smallmouth bass. Beware of the trademark spiny-rays on the dorsal fin of this sunfish - ouch! Crappies are also called "panfish" because they are thin, small (18 inches and under) and used for food (yum). Crappies are tricky to catch because of the very thin membrane around their mouth, which makes it hard to set the hook. This is why they are nicknamed "papermouth."

Crappies were introduced in waters statewide from 1800-1920 in locations where they were originally not found. You can find them in open water and places with submerged stumps and logs, rocks and rocky ledges, deep pools in rivers, and areas with some aquatic vegetation reaching above the surface of the water.

Spawning season is May through July in nest colonies from 1.5-6 feet deep. Males build a disc-shaped nest near emergent vegetation and defend the nest, biting at intruders. They spawn by touching bellies and releasing several thousand eggs (female) and milt (male) simultaneously. Eggs hatch in a few days. Crappie live to about five years of age.

Crappie fishing is popular in the spring and winter. Find a place with sunken logs, brush piles and emergent vegetation (nesting sites in spring) close to shore. In summer, try deep holes or river channels with sunken logs or brush piles called "crappie holes" in the early morning or evening. The trick is to keep the bait moving constantly!

Check the current fishing regulations on the main DNR Web site for bag limits and seasons.