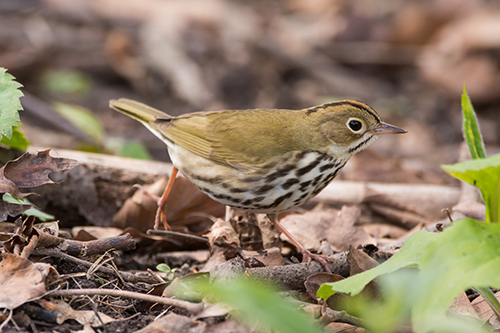 This warbler can be found hopping on the floor of Wisconsin's mature forests--those that are usually dry with deciduous trees, but you can also find them in wet areas or in northern coniferous forests. They like areas with little or no underbrush. The term "oven" bird comes from the shape of their ground nests which look like a little oven. Don't think they spend all of their time in Wisconsin though. These are special birds called "neotropical migrants" which means they migrate south to the tropics. In the case of the ovenbird, they migrate to Nicaragua. Can you find Nicaragua on the map? This means that they fly about 2,300 miles to reach their winter home! Biologists think they migrate along the Mississippi River or "Mississippi Flyway," the path that many waterfowl take to fly south. They're not on this journey in the daytime, though. Ovenbirds migrate at night at approximately 64 kilometers per hour to reach their Spanish speaking summer home. They are one of the few birds that nest in the forest and spend their winters in the forest as well.

Ovenbirds measure only 6 inches and are well hidden in the trees by their olive-brown coloring on their backside. You might see the large orange stripe on their head that reaches from the beak to the back of their head. They've also got black strips on either side of the orange patch. You might catch a glimpse of their white chest with black lines leading from the chin to their belly. They're not always easy to see, but they're often easy to hear. Listen for their "t-cher, t-cher, t-cher, t-cher" call that gets louder as they sing. They eat insects wherever they go, Wisconsin or Nicaragua, and help keep some pest insects under control. Ovenbirds live in most of Canada and 2/3 of the lower United States including the Midwestern and eastern states.