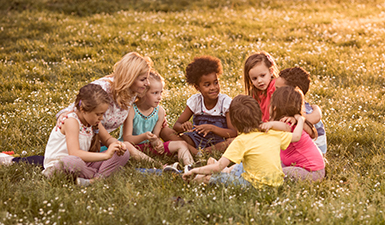 Pearl Pohl was raised in Milwaukee, Wisconsin where she graduated from West Division High School in 1906. She decided to be a teacher and completed a teaching degree two years later.

She had a long teaching career lasting from 1908 until her retirement in 1953. During this time, she combined her skill as an educator with her dedication as a conservationist. She was one of the biggest promoters of conservation education in public schools in Wisconsin. According to a League Leader publication dated 1972, she "was among an early group of conservationists who worked successfully on getting legislation passed which made environmental education mandatory in Wisconsin schools - and this back in 1936!"

Ms. Pohl was a believer in getting students like you out of the classroom. She took students on all day field trips to study soil conservation, plant trees, work on clean-up projects and other conservation activities. In the classroom, she had kids role play to generate discussion on resource issues. These types of activities are still going on in Wisconsin schools today as your teachers help you gain: an awareness and appreciation of nature, knowledge about the outdoors, and an understanding on how you can help protect our natural resources.

Ms. Pohl retired from teaching in 1953, but she put her valuable leadership abilities and dedication to the environment to use throughout her life. She was a conservation leader for nearly half a century. She fought to preserve the Flambeau River State Forest and Namekagon River. Her involvement in other conservation projects included efforts to keep portions of Wisconsin rivers under Wild and Scenic River designation, particularly the Namekagon and the Wolf.

She was involved with a number of causes and organizations and skillful in getting help for her many causes. She left the people she met with unforgettable impressions as to the things in life that really count: forests, running rivers, and the opportunity to visit unique natural areas.

Pearl Pohl was the founding member of the Wisconsin Council for Conservation Education. In 1970, at the age of 80, she directed a drive to establish the Environmental Education Council of Greater Milwaukee and became its vice president.

"As far back as 1908 when most of today's environmental activities were yet to be born, Miss Pearl L. Pohl began her career of teaching, leading, organizing, crusading, and championing the cause of protecting and wisely using Wisconsin's natural resources. Her efforts and accomplishments spanned the eras of conservation, ecology and Earth Day, and entered today's period of environmental awareness. Her record of performance will not be found in famous books on the shelves of hallowed libraries, but the impact of her efforts will remain deeply etched in Wisconsin's struggle to preserve and deliver to posterity some of its natural legacy." - Cyril Kabat at the 1976 Wisconsin Academy Annual Meeting.