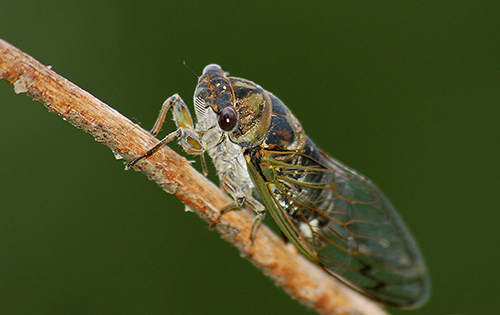 The Buzz On Cicada

It's a short season in the sun for this buzzing insect.

Who among us hasn't heard that persistent hum in the trees on a warm summer afternoon? Most everyone knows the sound and many know the source, but few take the time to see the noisy little buzzer who simply insists on being heard.

Although more than nine species of cicadas are found in Wisconsin, the one most frequently encountered is Tibicen canicularis, sometimes called the Dogday Harvestfly. Although it might look a bit fearsome to the person lucky enough to see one up close, it is completely harmless; buzzing is the way it attracts a mate. The cicada looks like a fly to some, but it is actually closely related to the much smaller aphids and leafhoppers.

The droning sound is produced by a pair of drumskin-like organs on the base of the abdomen. These vibrate at a high speed thus buzzing when the male cicada calls for a mate usually between mid-July and mid-September.

Once mating is complete, the female slits an opening in a small branch or twig with her ovipositor and deposits a small cluster of eggs. When the eggs hatch, the young nymphs drop to the ground, burrow down and begin feeding by sucking nourishing juices from the tree roots.

The nymphs remain in their subterranean (underground) world for approximately two years before they are ready to emerge into daylight and begin their adult lives. Other cicada species have a 4-17 year life cycle.
Cicadas buzz to attract mates.

After cicada emerge, the 1-1.5 inch nymph climbs up the tree trunk for several feet but usually stops below the branches. Then its skin splits lengthwise down its back and the adult cicada slowly pushes out.

As with several other members of the insect world, the adult cicada has a rather short life span, a few weeks, compared to its exceptionally long term juvenile stage. The adult cicada is not known to feed although it possesses a rather scary looking mouth part that has been known to give a good poke to a careless handler or two.

If the robin is to many the harbinger (messenger) of spring, then the cicada is perhaps an advance scout for autumn warning all who hear it to "enjoy the summer while you can for the end is near."