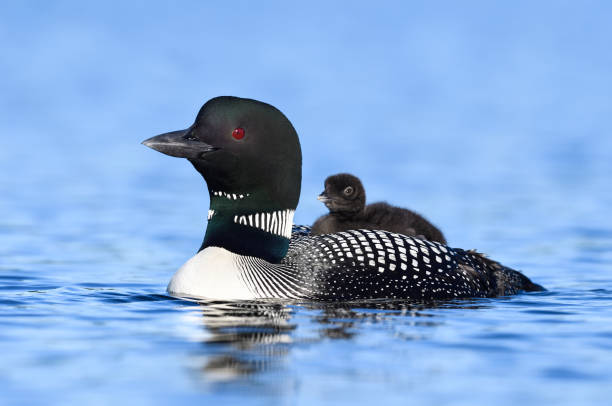 Listen. That eerie sound you hear is not a ghost haunting a northern lake. It's the call of the common loon. This bird, whose ancestors roamed the earth 65 million years ago, can be found on Wisconsin's northern lakes in the summer. They come here to breed and raise their young. Come fall, they head to the ocean coasts to overwinter. (You can track migrating loons (Leaves EEK!) as part of a loon migration study.)

Common items on the loon's menu are perch, bullhead, and sunfish. They're also known to eat frogs, crayfish, and even leeches—yum,yum. Check out the loon's long, pointed beak—the better to grab fish and other goodies. The loon dives underwater to grab its prey and then swallows it in one gulp.

Living on the Water

Loons are made for living on the water. The torpedo-like body is streamlined for swimming underwater. The legs of a loon are set far back on its body to work like oars with its large webbed feet. The body color, dark on top and light on the bottom makes loons less visible to fish as they swim. Some scientists think the loon's red eyes help it see better underwater.

Because the loon's legs are so far back on its body and because its body is so long, loons have trouble taking-off. Have you ever seen a loon "running" across a lake? A loon has to run across the water for up to ¼ mile beating its wings in order to get enough lift to take off. This need for a long runway means that loons need a certain size lake in order to take off. You'll rarely find a loon in lakes under 9 or 10 acres.

When disturbed the loon folds its wings against its body and swims upright in what is called a penguin dance. With its wings tucked against its body it looks kind of like a penguin. This dance is done when the loon is trying to scare enemies away from its chicks. "Dancing" like this takes a lot of energy so it's important that you keep your distance from loons. If you get too close to it and its chicks or nest, the loon will think you're its enemy and start the penguin dance. If you don't leave the area, the loon can dance until it's exhausted and dies.

The loon has another dance that it does when it wants to chase away other birds. It splashes the water with its wings and kicks its feet so quickly that it is actually walking on water.

Loons are fast in the water, but have trouble walking on land. They don't spend much time on land, except to nest. Their nests are made of weeds and grass and are usually located in grass along the lake shoreline. A loon may use the same nest year after year. Two olive-brown eggs are laid. Crows, ravens, gulls, skunks, mink and raccoons (especially raccoons) eat the eggs. Both male and female loons take turns sitting on the eggs. The eggs hatch in about one month. Soon after birth the chicks are in the water swimming with their parents. Swimming in the cold water is hard on the chicks, so from time to time they hitch a ride on their parent's back. This also protects them from predators like snapping turtles and muskies.

In 1978, the Sigurd Olson Environmental Institute in Ashland, Wisconsin started a loon conservation program. In 1988 it was combined with a program in Minnesota and given the name LoonWatch. This program trains volunteers to help protect loons and their habitats; track loon populations; and educate people about loons. It also sponsors research and education about loons.

In July hundreds of Loon Watch volunteers will get up before the sun to go count loons on more than 250 lakes. The results of this survey will help biologists track the number of loons in Wisconsin.

There are many Native American stories about loons. The Ojibwa (Chippewa) Indians called the loon "Mang" or "the most handsome of birds." They thought the loons haunting cry was an omen of death. In some native legends the loon is a bird of magical powers, in others a messenger or a symbol of power. You can read some of these Native American stories in "Loon Book" by Tom Hollatz. Your public library should have a copy.

If you get a chance to visit a northern lake this summer, listen for the haunting call of the common loon.