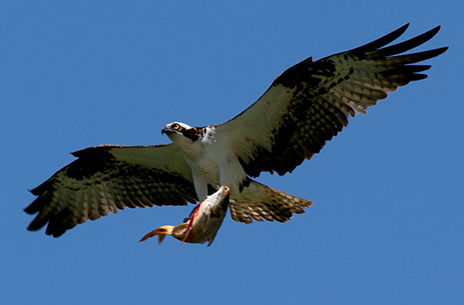 The Osprey, also known as the fish hawk, eyes its dinner while hovering over the open water. It plunges gracefully and quickly into the water feet first to grab a slippery fish. The fish wiggles and squirms, but the powerful talons, or claws, help to keep the fish from escaping. The bird rises out of the water carrying its prey headfirst. Ospreys can't swim and may drown if their claws get stuck into a large fish.

Osprey are summer residents in Wisconsin. You may spot one while visiting a wetland, inland lake, or one of the Great Lakes over summer vacation. Ospreys are listed as threatened on Wisconsin's Endangered Species List. Browse on to learn more about the fish hawk.

Ospreys are large birds with a wingspan of up to 6 feet. They glide through the air on long crooked wings. Their wings are angled back at the wrist when they fly. The top of their wings are black-brown and their head, neck, chest, legs, and underwings are white. The osprey's white head has a broad, black cheek patch. Its tail is a mix of white and brown stripes. Male and female ospreys look alike, except some females may have a necklace of dark streaking. Listen this summer for the sharp whistles and chirps of the osprey. Don't get too close to their nests or their call will become more frenzied.

Ospreys return to Wisconsin in mid-April from warmer southerly states. When they are 3-4 years old they will mate and nest. Ospreys are territorial birds, so they don't like other ospreys near their nests. They select nesting sites near the water and build on top of trees or power poles. Often they will nest at the same spot year after year, making repairs from weather and environmental damage.

The nests are easy to spot. They are more than 3 feet wide and are made up of big sticks lined with grasses and weeds. A female lays 3 buff-colored eggs, speckled with brown. She will incubate the eggs for 28 days, until the eggs hatch. The female will rarely leave her nest during this time, not even to fetch food. The male osprey will bring her fish to eat.

Osprey chicks are vulnerable to cold. The mothers must stay close to the nest to shield the chicks from sun, rain, and cold. It is important to stay away from the nest, so you don't scare the female. If she senses danger, she will signal to the young to play dead.

Ospreys have a high death rate during the first 2 years of life due to weather, predation, and accidents. An average of 1 chick per nest dies each year. Once the birds reach adulthood, their chances for long-term survival are good. Ospreys can live as long as 20 years.

A Place to Hang Your Hat

Ospreys live on all continents except Antarctica. They live along rivers, lakes and, coastlines. In Wisconsin, ospreys live in the northwest and north central part of the state. A few nest along the Wisconsin River. In the winter, ospreys migrate south.

Ospreys were never numerous in Wisconsin. Osprey populations in Wisconsin and across the U.S. began to decline in the 1950's due to the harmful impacts of organochlorine pesticides like DDT. The chemicals caused females to lay eggs with thin shells that broke during incubation. In 1972, the use of organochlorine pesticides was banned in the U.S. This helped gradually increase osprey populations. But, nest blow-downs, habitat destruction, and predation continue to hurt osprey populations.

In 1972, ospreys were placed on the Wisconsin Endangered Species List. Since the banning of DDT, populations have recovered to more than 364 nesting pairs in the state. In 1989 the osprey was reclassified from endangered to threatened. Watch for these birds sailing over Wisconsin lakes this summer.