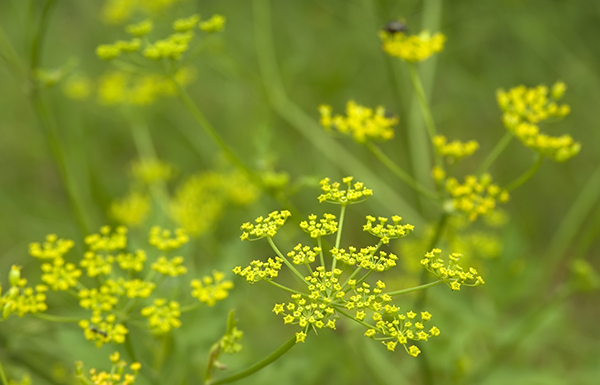 No one is quite sure when this plant arrived and whether someone brought it to this country on purpose or whether it hitched a ride as seed with an immigrant. There are records of this plant in Wisconsin from as early as 1894--more than 100 years ago.

All of Wisconsin. You'll find it in open habitat--along roadsides, in abandoned fields, and prairies. It is an aggressive plant and once it gets established will spread rapidly. It doesn't like shade.

Wild parsnip is a member of the carrot family. It spends its first summer as a rosette of leaves fairly close to the ground. The plant is anchored in place by a long, thick taproot. When conditions are right--usually in its second summer--it sends up a single flower stalk that holds hundreds of yellow flowers in flat-topped, umbrella-like clusters called umbels. The flower stalks can grow to be more than 4-feet tall.

Disguise (don't be fooled by look-alikes):
Wild parsnip can be confused with prairie parsley, a native prairie species listed as threatened in Wisconsin.

Don't Get Burned By This Invader 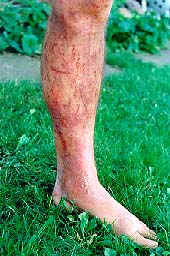 Wild parsnip is one of a few, unique plants that can cause phyto-photo-dermatitis. (Try to say that quickly three times.) What this means is that chemicals in the juices of this plant with the help of ultraviolet light can burn your skin. These chemicals are found in the green leaves, stems and fruits of wild parsnip.

The chemicals in the plant that cause this problem are called furocoumarins. When absorbed by your skin, they're energized by ultraviolet light, causing a breakdown of cells and skin tissue. This leaves you with a red, sunburn-like area. (Don't think you're safe on a cloudy day - you can still get burned since ultraviolet light is present even on cloudy days.) Once exposed, your skin will turn red within 24 to 48 hours. In many cases, after the skin reddens, blisters appear--some of them pretty big. Sometimes the area that was burned takes on a dark red or brown discoloration that can last for as long as 2 years.

Parsnip burns often appear as streaks and long spots. Can you guess why? It shows up where a juicy leaf or stem dragged across the skin before exposure to the sun. The good news is, while it might hurt for awhile, the burning feeling will go away in a day or two. This is different from poison ivy where the itching can last for weeks.

It's best that you avoid wild parsnip and let adults try to control this alien invader. The best way to get rid of wild parsnip is by finding it early in its invasion when there aren't many plants. Cutting the root of each plant just below ground level can help stop the spread. This can be done with a dandelion-digging fork, a sharp shovel or spade. If the population is large, a power brush-cutter is sometimes used. Regular mowing, or grazing by cows, keeps wild parsnip from flowering and making seeds. If you're going to be near this invader, be sure to wear gloves, long-sleeved shirts, and pants.